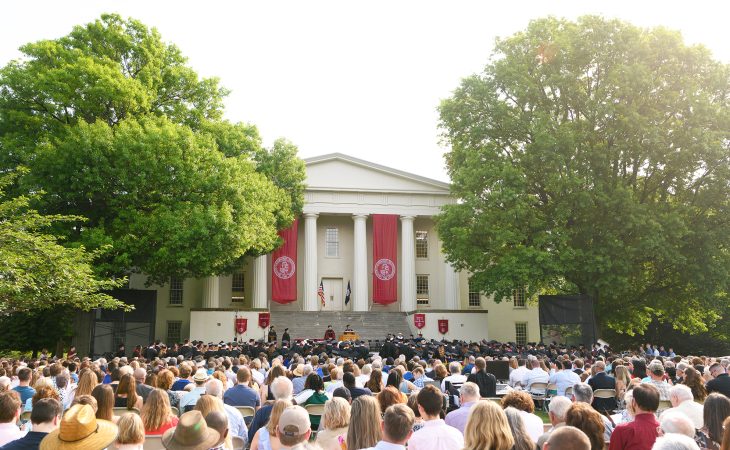 Transylvania University will award Bachelor of Arts degrees to 226 seniors at its commencement on Saturday, May 25.

The 9 a.m. ceremony in front of historic Old Morrison will include an address by Deogratias “Deo” Niyizonkiza, a leading advocate for the world’s most impoverished people and founder and CEO of Village Health Works in Burundi.

Students in this year’s graduating class also have distinguished themselves academically, with numerous accolades.

• Thirty-eight percent of the 226 graduating seniors are receiving Latin honors for a cumulative GPA of at least 3.5, and 47 percent are receiving program honors.

• Forty-seven percent of this year’s graduates studied abroad while at Transylvania—either for a full term, a summer or during the four-week May term.

• Senior achievements include the IU Lilly Family School of Philanthropy Fellowship, a Lexington Rotary Club Ollie and Dick Hurst Award, and a Cralle Foundation/Joan Cralle Day Fellowship from the University of Kentucky.

• The student speaker at this year’s commencement will be Presli Neal, a first-generation college student from Lexington. The neuroscience major has been a member of the Student Government Association, Pre-Health Club, Pre-Physician Assistant Club and STEM Empowerment Club, and she has served as membership director of her sorority, Phi Mu. She plans to attend physician assistant school and hopes to work in pediatrics or emergency medicine.

Niyizonkiza’s speech will cap off an academic year focused on the theme of civility, which is not just an abstract concept to him—but a matter of life and death.

The Burundi native fled the killing fields of his homeland in the early 1990s to New York, where he lived for a while in Central Park before learning English and completing undergraduate degrees in biochemistry and philosophy at Columbia University. He then attended Harvard to study public health and Dartmouth for medical school.

Niyizonkiza returned to Africa to start Village Health Works, a community health center in an area with limited access to quality medical care. “Upon my return to Burundi, it was the sheerest form of civility—uniting formerly warring people to turn enemies into a new community of forgiveness, collaboration, healing and hope—that became Village Health Works.

“I am so proud to be taking part in the graduation ceremonies at Transylvania University, where community service is so highly valued and where students are taught to become citizens who are not just out to make a living, but who are living to make a difference through great ideas and actions that speak to all humanity,” Niyizonkiza said.

Transylvania President Seamus Carey recognizes the central role of civil discourse in the educational process. “As our graduating seniors prepare to embark on their lives after Transylvania, they will take with them the wisdom of a man who embodies the value of civility,” he said.

See the full schedule for this year’s commencement, which will be in the Clive M. Beck Center if it rains.