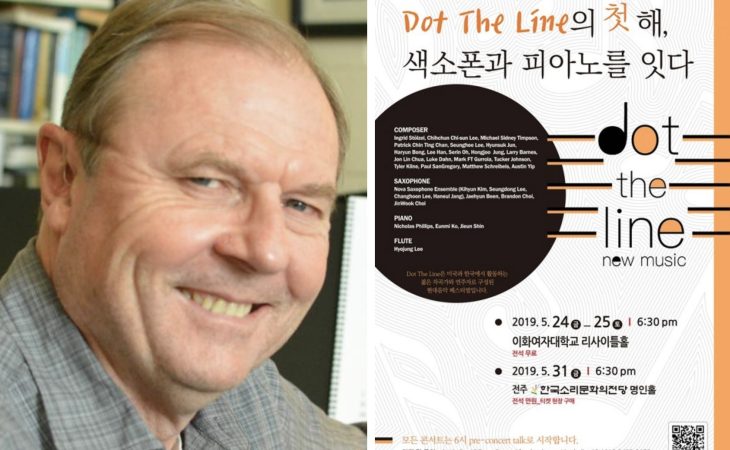 If you’re Larry Barnes, a Transylvania University music professor, you answer a call from the Dot the Line Festival in Seoul and Jeonju, Korea, and submit a unique composition for three saxophones and wind chimes.

In late May, Barnes will hear his work performed by Korean musicians as part of a festival that strives to deepen the relationship between Korean and American musicians. For the 13 invited composers, it’s an opportunity to hear their work fully realized.

“For me, the performance is the difference,” Barnes says, “between seeing the work in black-and-white, and hearing it in color.”

He remembers the first time he heard the work, “from the faraway nearby,” performed in 1987, when he composed it for musicians in the Lexington, Richmond and Louisville areas. What begins with a mysterious tenor sax solo accompanied by the wind chimes, climbs higher as the baritone and alto sax enter, becoming staccato. “After a frenzied climax,” he says, “the wind chimes from the opening are echoed by similar sounds made by the intertwining pitches of the saxophones as their notes vibrate and pulse softly in the high register.” It’s a different world of music from what he hears when he composes at the piano.

Barnes likes to get away from sounds and cultures that are familiar. He began to travel in earnest after a faculty meeting in 1999 when he volunteered to fill the curricular void and offer a class at Transy in world music. It fit perfectly with his approach to life: “always learning,” as he says.

He remembers his first day in China and becoming so enthralled by the musicians busking at the historical locations, recording and interacting with them, that he missed the tour bus’s departure. The “bends” in their music, he notes, “express the emotion and relate directly to the diphthongs in the language.”

Among his travels, he has visited Senegal, listening to the Islamic call to prayer and the silence surrounding places of worship, and he returns regularly to Costa Rica, taking his May term class on tours created especially for them to sample some of the 18 local styles of music.

Of course his own music makes tours of the world with or without him. This year, Barnes received an award from the American Society of Composers, Authors and Publishers for performances of his music in Croatia, Poland, Latvia and the U.S. Over the summer he’ll be composing a work for the Lexington Chamber Orchestra.

As he embarks on this newest international journey, the sense of adventure is audible. “This summer is wide open,” he says of his trip to Korea and the music he will explore. He’s already lined up some leads to find examples of K-pop and noise-core groups that he describes as “East Asia’s death-metal-band-times-five.” They’ll be perfect for the jazz and rock class he teaches at Transy.