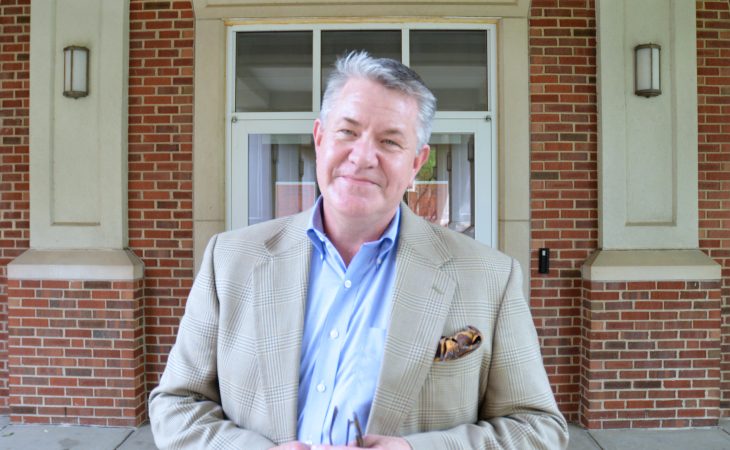 Maury Sparrow, a 1987 Transylvania University graduate and LexArts communications director, is hosting an après-theater cocktail party on Saturday, May 18, to raise money for the university’s John Fryer Fund for Diversity and Inclusion.

Guests of the event, which will follow that evening’s performance of “217 Boxes of Dr. Henry Anonymous,” will include the cast and Ain Gordon, the play’s Obie Award-winning writer and director. Reserve tickets.

The party will be at the newly renovated home of Sparrow and Craig Wahlgren, which is a short walk from the Little Theater play venue.

Performances of the off-Broadway production will be at 7:30 p.m. on May 16, 17 and 18 and at 2:30 p.m. on May 19. Tickets are free, and cash or check donations will be collected at the door to also benefit the Fryer Fund. Also, there will be a talk-back session with Gordon after the opening performance on May 16. Reserve tickets for the play on the transy.edu website.

“217 Boxes” tells the story of John Fryer, a seminal but overlooked pioneer in the battle for LGBTQ equality. The 1957 Transylvania graduate and psychiatrist helped declassify homosexuality as a mental disease.

Sparrow noted the cultural change in attitude not just since Fryer’s time—but since the ’80s when Sparrow was a college student. “My time at Transylvania was a wonderful experience,” he said. “But it was a time when homosexuality was still covered in a course called Deviant Behavior. It wasn’t quite self-affirming that I was somehow ‘deviant.’ That is the struggle so many have suffered, and many still do. But the strides have been great and the momentum for an inclusive society continues to build.”

Now at Transylvania, in addition the recent Pride Week, students and alumni have resources such as TUnity, the LGBT* Alumni Network and the university’s Office of Diversity and Inclusion. “Transy is such an open and affirming university now,” Sparrow said. “And I think it’s great to continue that tradition.”

Another Transylvania alum, Tim Collins ’81, saw “217 Boxes” during its New York City run and then raised money to bring it to campus.