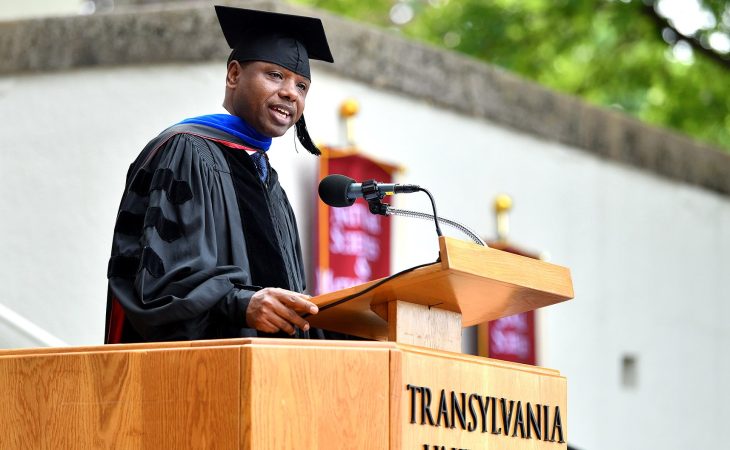 On Saturday, May 25, 229 students graduated from Transylvania University. Deogratias Niyizonkiza, founder and CEO, Village Health Works in Burundi was the commencement speaker. Below are his remarks as prepared for delivery.

Class of 2019, good morning and congratulations!

It is an honor and a privilege for me to be with you on this special day in your life. Thank you for inviting me. I would like to share with you my brief story, not because it’s worthier or more important than anyone else’s, but because it’s the story I know best—and because it illustrates so dramatically that the simple act of caring for a stranger can have consequences more beautiful, more far-reaching, and more world-changing than you might ever imagine.

When I see friends like you, it’s not an exaggeration to say that my struggles to survive the trauma of war and homelessness in New York City would have turned my life into dust were it not for the kindness of my adopted American parents, Nancy and Charlie Wolf—who would otherwise be considered “strangers” – a word I use with both respect and caution.

Respect for strangers because,  I would argue, they are the source of some of the most profound of human experiences – the beautiful and the ugly. Caution because I am not convinced that we are ever strangers, even when – and perhaps especially when – our otherness is used to justify brutality and war.

A year ago, I had the privilege to be here for a Kenan conversation, and I shared my experiences founding and serving my organization, Village Health Works, in my native Burundi. Many of the students had read my life journey in Tracy Kidder’s book, Strength In What Remains. But I know most of you were not present for that, so I invite you to join me for a few moments on my journey.

In 2005, after 11 years in the U.S., I went back to Burundi. I knew that my native country had suffered a lot. But what I saw was unspeakable. There were patients watching themselves die in destroyed, repulsive hospitals with no doctors and no medications. I looked into many faces and wondered: in such conditions, how can anyone find happiness again? It was so heartbreaking for me that I couldn’t focus on anything else anymore.

My thoughts were bent on how to bring dignified, community-supported medical services to the destitute sick—and how to create a model that could be replicated throughout Burundi and far beyond its borders. It seemed like such a pipe dream. I was often afraid that even my closest friends would think of me as a madman if I told them about my crazy ideas. It was such a nightmare for me to have to struggle with how to explain to my friends that I escaped and left Burundi, but Burundi—and the childhood friends I lost from senseless deaths and other totally preventable tragedies—never left my mind. Or my heart.

For years trying to recover from the trauma of war, I reflected on my childhood life, and concluded that Hutus and Tutsis were not created by God to kill each other, that the atrocities were a result of poverty, and lack of both education based on critical thinking and access to quality health care. It became clear to me that the collapse of education and the health care systems is the greatest threat to civility, development and peace.

When I was in Burundi in December 2005, I began to engage the traumatized community in my village and I asked them to think of what it would take to come together, put our tragic history aside, and build a model clinic that the community would own.

At first, I encountered skepticism and suspicion, but in the end that idea helped them light the spark of their own optimism which had been extinguished by the horrors they had lived through.

It was the community who donated the land to Village Health Works, the land being the only commodity they had.

It was the community, who was desperately poor, dispirited, and disempowered —many former enemies—who became enthusiastic collaborators in a pioneering project and who made the bricks to start the foundation of a 50-bed clinic which is soon going to become a 150-bed state-of-the art teaching hospital.

Through the process of building Village Health Works, local community members (men and women) who overcame unspeakable tragedies started healing from the trauma of war, cultivating trust and becoming good neighbors and friends again. We rediscovered civility. We remembered how to rely on one another, bound by mutual responsibility.  Today, this reliance on the “other” extends far beyond the community we serve in Burundi.

An increasing number of friends from around the world are behind our vision – which was seen in its infancy as pure hallucination, to say the least. Our hard journey has made all the difference in so many lives. Doctors come to Burundi to help patients in our clinic; educators volunteer to lead teacher trainings; economists, engineers and agronomists offer their expertise to our staff.  Donations of time, money and skills of people who are strangers to the people of Burundi but feel tied to their well-being have made our rural community feel welcomed into the world community. That restores our self-respect, dignity, and our hope. And my American friends who have joined to care for strangers have deepened their own dignity and added to their own store of hope too. It has expanded their sense of citizenship, of civility. Being able to serve a cause that matters beyond oneself is a privilege, and an honor. It surely has been one I am most proud of.

I also believe that giving to strangers creates a balance in the world – a balance to human beings’ long, ugly history of taking from strangers, probably beginning when one proto-hominid knocked another with a bone and took his delicious saber-tooth tiger steak. The history of taking from strangers may have reached its heights in the imperial plunder of the African continent. But wherever we are in the world, giving to strangers gets the balance right again.

And from a place of balance, anything becomes possible. It’s a transformative foundation, and I can tell you so many stories showing how Village Health Works is transforming lives.

I often use the word “lucky” in telling my own story, and of course, “lucky” is how much of it felt to me. But luck came in the form of the kindness of others like my beloved adopted American parents, Nancy and Charlie Wolf.

On this day of your graduation, and as you step forward into the adventure that will be your next chapter, I’d like to ask you to meditate on the luck that you’re born with and the luck that you’ve accumulated, the luck of your upbringing and the luck of a great education. All of that luck – even the luck to be able to work hard towards your goals – comes from the kindness and compassion of those we know, and those we don’t: strangers.

You have been privileged to have a president and a faculty that foster an environment in which you have learned about the awful inequalities in the world – the appalling disparities of health, and wealth, and opportunity. You have been lucky to be at such a beautiful university that has given you the opportunities to become involved with the community around you as part of your education as a way of showing you how to turn towards these problems – to care and engage.

The choice is yours.

And here’s my hard-won advice: choose to serve, to give back, to teach, to inspire others, and to pursue sustainable acts of kindness and compassion. Choose civility. Choose to be citizens who are not just out to make a living, but who are living to make a difference. Choose to do this for those near to you and for those we call strangers, with whom you have little in common but your shared humanity.

Choose to learn from our challenges, then have the courage to step out of them and our history so that we can become global citizens—living every day with compassion, curiosity, humility, and gratitude!

In doing so, you will make our world a better, safer and more peaceful place. The future is yours. I can personally attest that good deeds sustain long after the original action, often growing and expanding in ways that no one can predict.

Thank you for allowing me to share these reflections with you on this joyful day of your graduation from Transylvania University. I very much wish you the best.