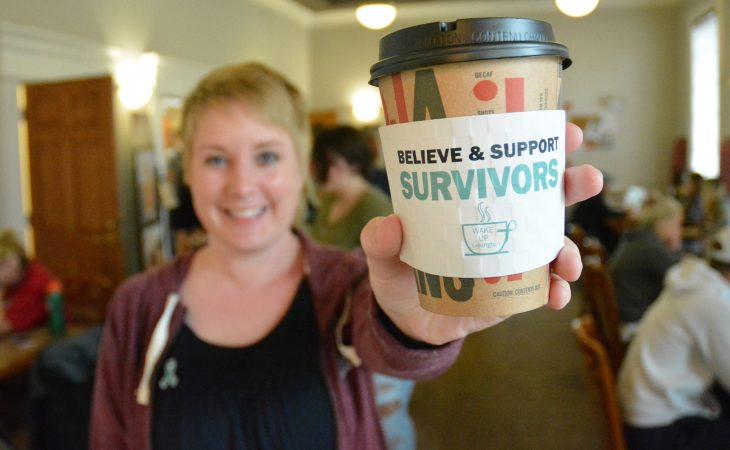 Ashley Hill, Transylvania University’s director of student wellbeing, is helping Lexington wake up and recognize the many resources available to victims of sexual violence—and to prevent these assaults from happening in the first place.

As the Outreach and Advocacy Committee chair for the local Domestic and Sexual Violence Prevention Coalition, she is distributing hot drink sleeves, teal ribbons, wristbands, stickers and other resources with info—such as hotline numbers—to 11 coffee shops for Friday morning’s Wake Up, Lex initiative.

The Transylvania Jazzman’s Cafe is participating in the effort, which is one of several campus events during National Sexual Assault Awareness Month.

“We want to raise awareness, and we want people to know that they have resources,” Hill said. “We decided to put things in coffee shops so people can grab something for their friends or for themselves. That includes people who might not even know they need resources—for instance those who are in an unhealthy relationship.”

Hill added that the university makes sure students now about their options, but people in the community might not necessarily know where to reach out.

Wake Up, Lex also is a way to help local businesses show support for a “really important topic,” Hill said. She came up with the idea for the initiative with Stephanie Theakston, chair of the Domestic and Sexual Violence Prevention Coalition. Chase Waskey, Transylvania’s administrative assistant and part-time health educator, designed the event’s logo.

Other National Sexual Assault Awareness Month events on campus include Green Dot Day on April 17 to raise awareness about bystander accountability, and Denim Day on April 24 to get the word out about how a victim’s clothes shouldn’t be a factor in sexual assault cases. Students also will attend a free, public screening of “Anita Hill Speaking Truth to Power” at the Central Library’s Farish Theater on April 24 at 6:30 p.m.

Earlier this month, the Transylvania community participated in Wear Teal Day to show support for survivors of sexual assault.