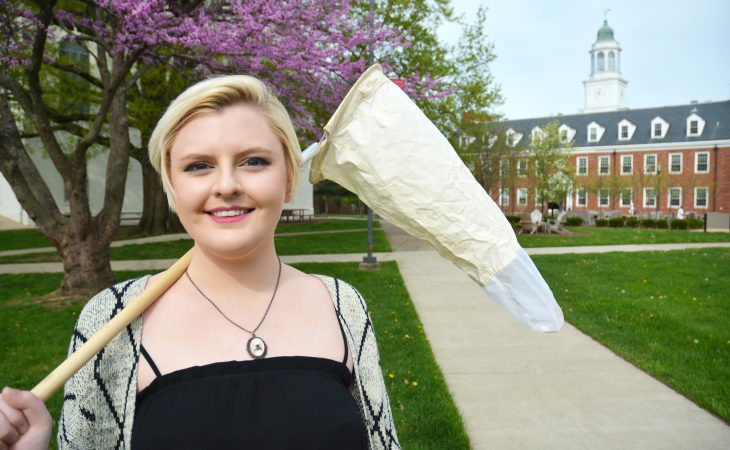 A Transylvania University senior once again has been awarded a Cralle Foundation/Joan Cralle Day Fellowship from the University of Kentucky.

Mary Wallace, a Biology major who plans to continue her studies in UK’s entomology graduate program, will receive a tuition scholarship and $15,000 stipend.

A Transylvania student has received the Cralle Fellowship four of the past five years. Students from 18 independent schools in the Association of Independent Kentucky Colleges and Universities are eligible for the award.

Wallace, who said she is excited to receive the scholarship, plans to pursue her doctorate in entomology. “The end goal is to run my own lab some day—to be a principal investigator. Being a professor and doing my own research would be ideal.”

She has been conducting research since she arrived at Transy. “That first summer with Dr. Adkins, I did a bug project—we sampled the insects in the pollinator gardens. That project is what made me decide I wanted to study bugs more seriously.”

The diversity of insects fascinates Wallace. “They play so many different roles in our ecosystem that we overlook every day. We walk over these bugs and don’t realize that they’re decomposing, they’re pollinating, they’re eating herbivores that eat our crops—they’re doing all these things for us, and we don’t even realize it.

Wallace, from Lexington, will graduate in May. She is a 2015 graduate of Bryan Station High School.