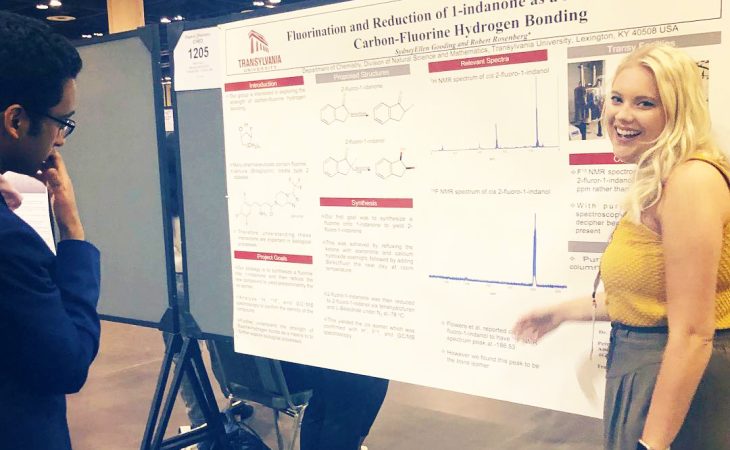 She said self-confidence will help them succeed in STEM fields.

“You really just have to be assertive and be comfortable and confident in your own self—or you’re going to get passed by,” she said. “Believe in your own ideas as much as your male lab mates would believe in their own.”

During an internship at a large research university, she worked with a lot of men in a lab and felt she had to come out and say what she wanted—not just expect to be handed something.

At Transylvania labs, however, she feels like males and females are treated equally. “I’ve never felt like more opportunities were given to the male students.”

Gooding’s opportunities to excel extend beyond the laboratory.

She and about a dozen other Transy students this week showcased their research at the American Chemical Society meeting in Orlando, Florida.

Her organic chemistry poster featured research she conducted with Professor of Chemistry Bob Rosenberg on carbon and hydrogen bonding in the presence of fluorines.

The meeting included a variety of talks and demonstrations—and it was a chance to meet thousands of chemistry students from across the country—from undergraduates to postdocs.

“It was neat to be in that type of environment,” she said.