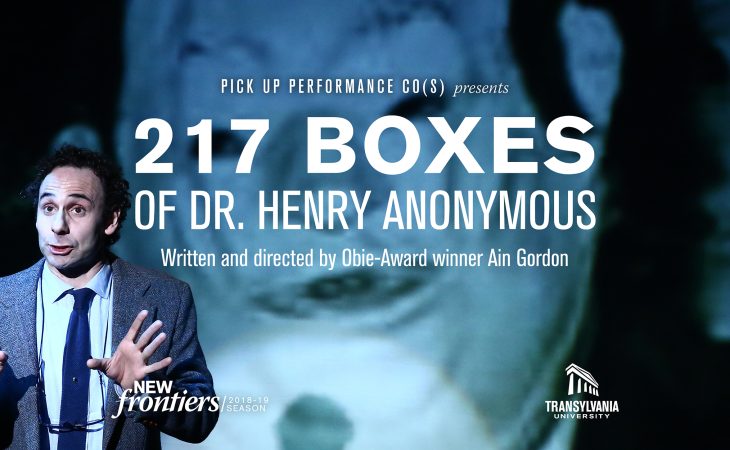 Transylvania University next month will host an off-Broadway production highlighting the accomplishments of John E. Fryer, a ’57 graduate who helped remove homosexuality from the Diagnostic and Statistical Manual of Mental Disorders.

Running May 16-19, “217 Boxes of Dr. Henry Anonymous” is coming to Lexington and the Transy campus through contributions by Transylvania alumni, JustFundKY, Rainmaker Hospitality, former Lexington Mayor Jim Gray, former LexArts President and CEO Jim Clark, the University of Kentucky Office of LGBTQ* Resources and other individuals and organizations who support equality and civil rights for LGBTQ people.

Tickets to these Pick Up Performance Co(s) shows are free, though donations will be accepted at the door to benefit the university’s John Fryer Fund for Diversity and Inclusion.

The play, which opened last May in the New York City Baryshnikov Arts Center, was a New York Times Critic’s Pick.

“The Transy Theater program is thrilled to be working with award-winning writer and director Ain Gordon on bringing his production of ‘217 Boxes’ to the university,” said Tosha Fowler, chair of the university’s theater program. “Great art is only as valuable as its accessibility to all who wish to experience it. I hope you will join us for a fantastic experience at the theater, accessible to all.”

Follow these links to reserve tickets for the 7:30 p.m. performances on May 16, 17 and 18, and the 2:30 p.m. show on May 19. There will be a talk-back session with Gordon after the opening performance on May 16. All shows are in Transylvania’s Lucille C. Little Theater.

The play gets its name from when Gordon, a three-time Obie Award-winning playwright, combed through 217 boxes of Fryer’s personal notes, professional papers and childhood relics to create this theatrical tribute to the man who made one of the most significant contributions ever to the gay-rights movement.

Calling himself Dr. Henry Anonymous, Fryer went before American Psychiatric Association in 1972 and said: “I am a psychiatrist, I am a homosexual.” Dr. Anonymous compelled psychiatry to declassify homosexuality as a mental disease, but who was Dr. Fryer?

Gordon’s play conjures three key figures from Fryer’s life, asking each to draw a portrait of the man behind the mask. As the New York Times wrote, “‘217 Boxes’ is an important work of documentary theater about a man who is a footnote to gay history, as well as a powerfully moving abstract of the decades of suffering and change that his life and attachments encompassed.”

The production is part of Transylvania’s New Frontiers series, which asks us to go beyond the familiar with new ideas, art and music.

Written and directed by Ain Gordon, “217 Boxes of Dr. Henry Anonymous” runs May 16-19 at Transylvania University.