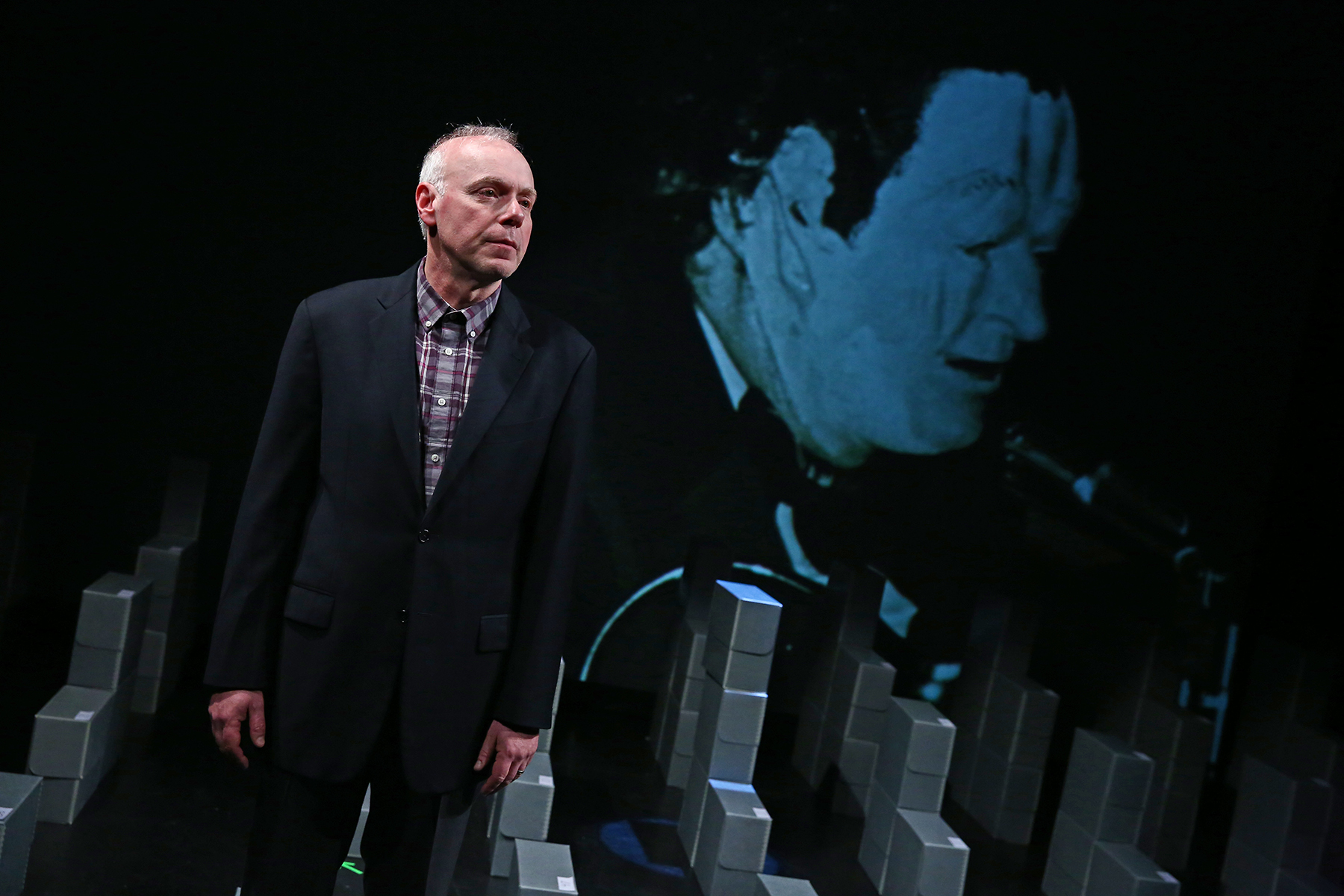 Dr. John Fryer, a seminal but overlooked, pioneer in the battle for LGBTQ equality is honored in the play “217 Boxes of Dr. Henry Anonymous” written and directed by three-time Obie award-winning playwright Ain Gordon. Fryer, a 1957 graduate of Transylvania, helped declassify homosexuality as a mental disease.

The Pick Up Performance Co(s) production of the New York Times Critic’s pick will be presented at Transylvania’s Lucille C. Little Theater May 16 – 19. Tickets are free and cash or check donations will be collected at the door to benefit the John Fryer Fund for Diversity and Inclusion.

In 1972 Dr. John Fryer, calling himself Dr. Henry Anonymous, donned an oversize tuxedo and rubber joke-shop mask to confront the American Psychiatric Association with these words: “I am a psychiatrist, I am a homosexual.” The testimony of Dr. Anonymous helped remove homosexuality from the Diagnostic and Statistical Manual of Mental Disorders, but who was Dr. Fryer?

During a two-year residency at the Historical Society of Pennsylvania, which houses Dr. Fryer’s papers, Gordon combed through his 217 boxes of personal notes, professional papers and childhood relics to create a compelling theatrical tribute to the man whose galvanizing testimony led to one of the most significant moments in the history of the gay-rights movement.

Gordon’s play conjures three key figures from Fryer’s life, asking each to draw a portrait of the man behind the mask.

The Lexington production is funded in part through contributions by Transylvania alumni, JustFundKY, Rainmaker Hospitality, former Lexington Mayor Jim Gray, former LexArts President and CEO Jim Clark, the University of Kentucky Office of LGBTQ* Resources and other individuals and organizations who support equality and civil rights for LGBTQ people.

DR. JOHN FRYER was born in Winchester Kentucky in 1937 and earned his bachelor’s degree from Transylvania University. He graduated from Vanderbilt University School of Medicine in 1962. After entering a psychiatry residency at the University of Pennsylvania School of Medicine, he was discharged when it was learned that he was homosexual. He completed his residency at a Pennsylvania mental hospital and became a private practitioner and psychiatry professor at Temple University School of Medicine. In the late 1960s, seminal gay pioneers Frank Kameny and Barbara Gittings focused on overturning the federal government’s ban on gay and lesbian employees and the APA’s classification of homosexuality as a mental illness. Kameny and Gittings convinced the APA to host a panel entitled “Psychiatry: Friend or Foe to the Homosexual?” and then decided they needed to bring in a psychiatrist who would admit their homosexuality. But because of societal approbation, risk of loss of medical licensure, and impact on patients and professional standing, Kameny and Gittings could not find a psychiatrist to serve on the panel. Ultimately, Fryer agreed to serve on the panel using the name Dr. Henry Anonymous and disguised with a mask and voice modulator. His testimony was so compelling that the APA convened a special committee to study the classification. At the 1973 Annual Meeting, the membership voted to remove homosexuality as a mental illness. As a result, the treatments for homosexuality were terminated and the classification could not be used to justify government policy. Fryer was also one of the first psychiatrists to treat patients with HIV and those with AIDS related bereavement issues. The APA’s highest annual civil rights award is named in John Fryer’s memory. There is a Pennsylvania Historical and Museum Commission historic marker for John Fryer in Philadelphia and the Historical Society of Pennsylvania houses the John Fryer archives.

AIN GORDON (Playwright/ Director) is a three-time Obie Award-winning writer/director/actor, a two-time NYFA recipient and a Guggenheim Fellow in Playwriting. Gordon’s work focuses on marginalized or forgotten histories and the invisible players inhabiting that space. Recent Projects include Radicals In Miniature; a series of requiems to personal icons that premiered May 2017 at Baryshnikov Arts Center and Vermont Performance Lab with touring to International Festival of Arts & Ideas, Quick Center, Connecticut College (all CT), plus Williams College and The Yard (both MA); 217 Boxes of Dr. Henry Anonymous culminating a two-year residency at the Historical Society of Pennsylvania funded by the Pew Center for Arts & Heritage focused on the papers of Dr. John Fryer who, disguised as Dr. Anonymous, faced the American Psychiatric Association in 1972 opposing the classification of homosexuality as a disease – premiered Painted Bride Arts Center (PA) May 2016, Baryshnikov Arts Center (NY) 2018, fall 2019 touring to CAP UCLA; Not What Happened, an examination of the politics of historical reenactment via a contrapuntal duet for two people that never meet: the historical re-enactor and the woman she portrays – BAM Next Wave Festival September 2013, Krannert Center (IL), Flynn Center (VT), etc; and If She Stood inspired by the Philadelphia Female Antislavery Society; a multiracial collective that almost accidentally discovered feminism – May 2012 Painted Bride (PA). Gordon is a former Core Writer of the Playwright’s Center (MN), has twice been a Visiting Artist at the Pew Center for Arts & Heritage (PA), a 2014 Artist-In-Residence at NYU Tisch School of The Arts, and Resident Artist at The Hermitage (FL) and will be an Atlantic Center for the Arts “Master Artist In Residence” in 2020. Gordon is Co-Founder of the Urban Memory Project and has been Co-Director of the Pick Up Performance Co(s) since 1992. www.aingordon.nyc.

PICK UP PERFORMANCE CO(S) was founded in 1971 and incorporated in 1978 (as Pick Up Performance Co., Inc.) to facilitate projects by David Gordon, the company was expanded in 1992 to include projects by Ain Gordon and renamed Pick Up Performance Co(s) in recognition of the dual father/son leadership with independent projects by each artist. PUPCos continues to be artist-led with multi-generational NYC roots supporting the wide-roaming interests of both artists in dance, theater, media, social practice, and the fusing of disciplines. This work manifests annually in both New York City and nationally. For 49 years PUPCos has charted a personal aesthetic path.