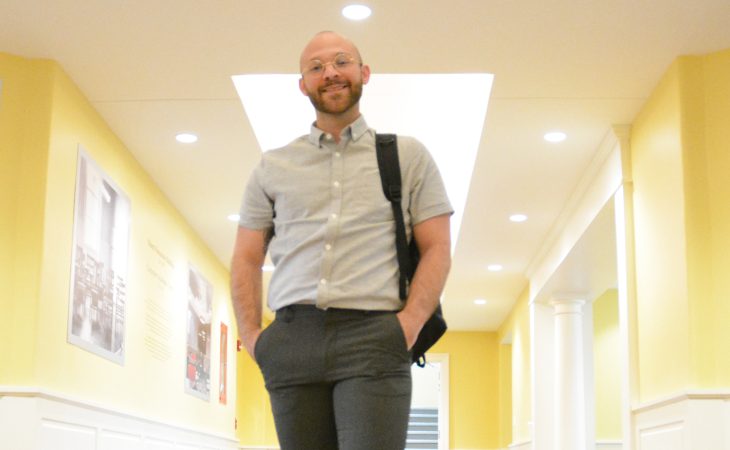 Many of the best stories are off the beaten path, and so are the lives of the people who tell them.

Transylvania senior Heath Stiltner is one of those storytellers. He struck out on his own to document subjects who were finding their calling in life, while he found his own.

Back in 2011, he didn’t return for his senior year because he was still unsure about what he wanted to do after graduation. He ended up traveling the world photographing clients for social media before recently returning to finish his degree.

Now this nontraditional student turns his eye to campus. For the next few weeks, as he and his classmates prepare for commencement, he will tell the story of the university’s May term through photos on the university’s Instagram account.

That project is a journey in itself—one that may answer the question: What it is about going to school at Transylvania that unites its students. “Storytelling to me is a way to talk about the ways you’re unique, while also pointing out the fact that at the root most people are very similar,” he said.

Stiltner grew up in Eastern Kentucky with a family of storytellers—including his grandfather, a teller of “bear tales,” and an aunt, a recounter of many travels.

After his first stint in college, he worked with a partner in a publishing business and then really turned his focus to photography and social media. Many of his clients were craftspeople, making products from textiles or leather, for instance. He photographed them in the spaces where they worked.

“The thing that I was always most interested in was the stories that people had to share,” he said. “There’s always a reason someone’s doing something.”

He also worked for a camera company, leading experiential sessions for all levels of photographers. Through this job, and through helping his niece and nephew with their schooling, he discovered he really likes teaching. Combine that with storytelling and you get a future history professor. Stiltner, an art history major, plans to attend graduate school and pursue that line of work after Transylvania.

An important aspect of being a professor is helping young adults with their path in life—being a role model as well as an educator, Stiltner said. “I ultimately realized what I wanted to do was to help young adults in their transition into college.”

Also, turn negative experiences into learning opportunities. For instance, the classes he most struggled with were often the ones that taught him the most—especially about himself.

Stiltner said he has gotten a lot of support after returning to Transylvania. You can make this a good community for yourself if you’re willing to put in the effort and get to know people, he said. When he reached out for assistance, he felt like those who provided it really understood why he had chosen a nontraditional route.

“I don’t think you always get that at a bigger school,” he said. “So Transy just felt right—twice.”