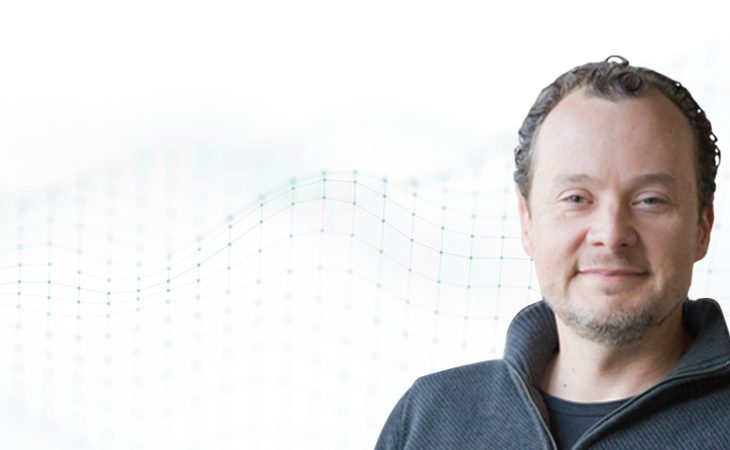 Mike Finley ’90 doesn’t wait for the next big thing to happen. He’s too busy anticipating, inventing, marketing and selling it.

Have you used an automated gas pump lately? That’s Finley. Wish you had sunglasses that offered polarized peripheral vision? His patent. These are two of what he calls the “less esoteric” of his 14 patents.

These days, his primary focus is on artificial intelligence—the biggest technological shift he’s witnessed in his 30-year career. He operates with the knowledge that “in a commercially interesting timeframe, companies will be hiring software as if it were a knowledge worker.”

Finley, who balances invention and viable enterprise in the full scale of his work, is able to recognize the need and opportunity, develop the tools to meet it, communicate and market the results and embrace the changes in what’s to come. He creates the vision and has the tools to carry it out.

A scientist, innovator of technology, co-founder of companies, author and a volunteer who is committed to education, Finley easily traces the multiple facets of his success to Transylvania: learning to think, innovate, write and communicate, and having the freedom to follow his interests by taking a wide array of classes.

The world of technology has changed profoundly since Finley graduated from Transylvania in 1990, yet, three decades later, he continues to thrive, ever on the cutting edge, finding his own tailwind, as he describes it, the difference between leading with creative vision and following the status quo. For a company, he notes, it’s about survival.

“Figuring out how to make something useful out of the technology that’s arising and getting that into the marketplace—that’s really the key difference,” he explains.

In Finley’s experience, profitable success requires innovation. “You can’t thrive in an environment where you’re not on the cutting edge of technology,” he explains. “So, by definition, what I do every day is pushing the boundary precisely to make sure that I’m not competing against anybody else—basically, creating my own tailwind by being out in front of everybody.”

To get at what sharpened the many facets of his edge, Finley contrasts his experience at Transylvania, which encouraged curiosity and multiple approaches, with other college programs that emphasize memorization of current knowledge that, as Finley points out, will be out of date by the time students enter the workforce.

“The engineering curriculum at famous schools prepares you for all the things that they know are out there. What Transy did for me was prepare me for the things we didn’t know were out there.”

Instead of graduating prepared for everything that already exists, he says, “I was prepared for what might come.” Part of that was having the freedom to explore many disciplines and perspectives.

“For me it was being able to say, ‘I’m going to take a film class. I’m going to learn to write, to learn about Baroque music. And, yes, at the same time I’m going to take accounting and physics.’ It was just having that flexibility to take everything that I enjoyed and lots of opportunities sponsored by Transy, such as my internship at IBM.”

By the time he graduated, Finley was surprised to have earned not only a physics major, but additional majors in math and computer science. And within those disciplines he found that same liberal arts sense of scope.

“Something I really appreciated about Transy was that I wasn’t in the hardware track or the software track; I was in computer science, so I started learning about computer architecture one day, learning about linear algebra the next day, about data structure the day after that. It was really a very broad set of skills that I was fortunate to be a part of.”

He recounts the intimacy of the classroom, how the professors held him accountable and the small class size required him to interact, communicate and develop the soft skills that are necessary in the workplace. They also allowed for multiple approaches to solutions and even reconfiguring the problem—so essential to Finley’s success after graduation.

“It was all about the techniques that you were going to use to get to the answer,” he explains, “not about whether the answer was correct or not, because there’s usually not just one correct answer—the world is full of ambiguities.” Professors presented real-world problems. And they checked up on him if he missed a class.

“It’s great to have all of that under one roof,” he acknowledges. “That’s super powerful.”

“I look at what Transylvania and the William T. Young Scholarship did for me,” he says, “and I feel a tremendous sense of debt and obligation to pay that forward.”

Finley serves on Transylvania’s Board of Trustees and as a mentor in the 100 Doors to Success program; he chairs the board of a K-8 charter school in Atlanta; and he is on the committee that guides Georgia’s computer science curriculum. His goal is to help diversify the students who thrive in science.

“But broader and bigger than that,” he adds, returning attention to the role of artificial intelligence in the near future, “I do believe we are facing a world where the fundamental currency of life is going to change.” Having the right education will be essential in meeting those challenges.