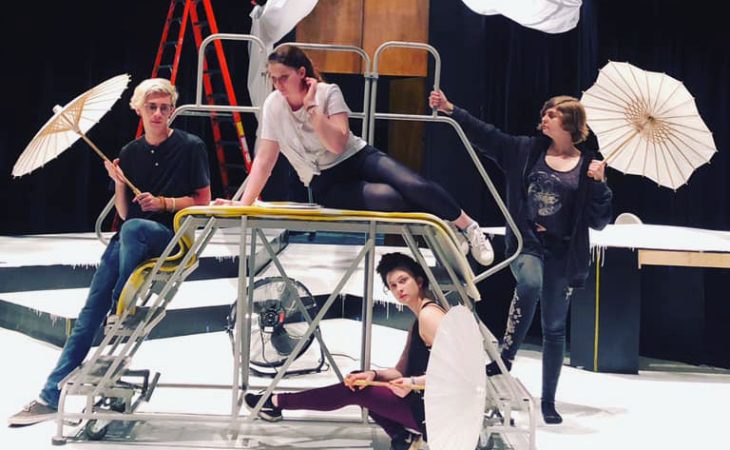 As Lysander so aptly puts it, “The course of true love never did run smooth…”

Now, I cannot be sure of this, but I would not be surprised if ol’ Billy Shakes was thinking of the theatre when he wrote this famous line. “A Midsummer Night’s Dream” fell into my hands, via text message, in the middle of a Monday afternoon. I’ll never forget reading that message from producer, J.D. Lovell: “would you be willing to direct?” Obviously, the answer was a big fat YES.

I came in as director two weeks into the process. I was forced to re-conceptualize the entire piece. I didn’t know where to begin, so I went to what we already had. What we had was basically a whole bunch of white china silk we had bought for the previous set. As I looked at old design sketches, I realized that they were all reminiscent of a circus. The cage in the basement of Mitchell Fine Arts center also gifted us with wonderfully colorful overalls that served as a springboard for the mechanicals.

Having very little time to flesh things out, I ran with the circus idea. The china silk became material for a tent, the mechanicals became clowns. Titania became the ringmaster, and Oberon became the strongman. Puck became a pierrot clown, and the lovers, I decided, would just have to get caught up in a circus instead of getting lost in the forest.  This quickly became a concept with a lot of potential.

Though the circus concept was born somewhat out of necessity, I did not fail to think about how fitting it was for this show. The play within a play fit beautifully into a circus, because the physical comedy of that scene could be exaggerated through clowning. Additionally, the tradition of the circus as a place where the lost could go to get away from the structure of the real world, works well for the motivations of the lovers’ flight away from Athens. The fairies running the whole thing only made sense. They are sort of like the directors running the show.

Sometimes necessity is a beautiful mistress.

I think all involved would agree that, “adaptability” has been our buzzword during this process. We have all faced challenges and grown through learning experiences together. It has been the people surrounding this process that have made it possible. The Transylvania Theatre Guild’s executive committee, the designers, the crew, the actors, and the support of Tosha Fowler, Missy Johnston and the theater department, have all rocked my socks off through this journey. We have worked together to create something of which we can all be proud.

It is my hope that you leave our theater with the spirit of our circus in your hearts, and perhaps, a hankering for cotton candy.

About the author: Madison Plucknett is the director for “A Midsummer Night’s Dream.”