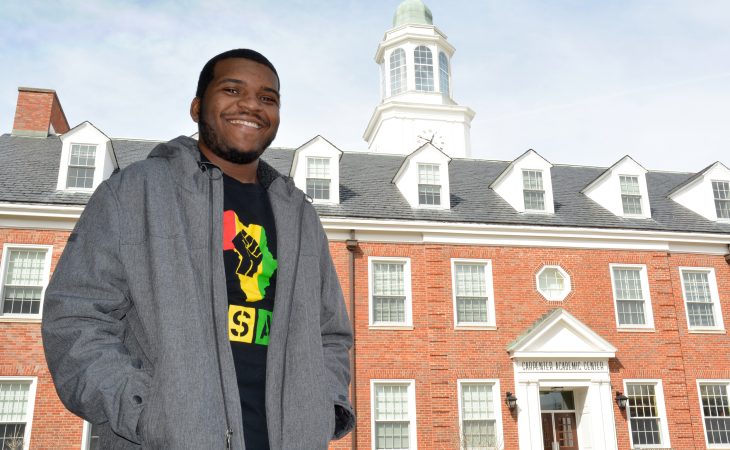 Jonathan Neal’s activism as a high school student in Louisville, Kentucky, drew the interest of church and community leaders, television stations, local and national award givers and even a campaign manager who encouraged him to consider a possible run for mayor. Neal had developed a reputation for speaking truth to power and for advocating on behalf of the vulnerable.

He remembers being frustrated by politicians who kept prioritizing recycling over neighborhood violence and prison reform. Drawing inspiration from the leadership and service of his parents and pastor, he got involved. He found himself thinking, “If you’re not effectively making purposeful change in your city, someone has to step up and do it.”

But before pursuing a career in politics and government service, Neal knew he first needed more education and experience. Drawn to Transylvania’s long history of producing political leaders, he wanted the same “elite education,” he says, that had prepared so many others before him.

As president of Transy’s Black Student Alliance, Neal’s goal is to create a lasting impact. “I’m trying to make BSA and my legacy at Transy about leaving this a better place for future African-American students to come,” he says. It’s a concept he’s embraced from his leadership training at Transy, focusing not on short-term gains, but on “leading to leave a better place.”

A sophomore, Neal says he wants to motivate his generation to advocate not just through social media, but in person and by putting leather to the pavement—just as his pastor advocated for civil rights in the 1960s and again 50 years later in Frankfort, Kentucky. Standing beside his pastor in the state’s capital sincerely moved him.

“That was when I really found my love for activism,” he says. “Seeing that passion still alive in a person who was active in the civil rights era gave me the push to want to be an activist. Seeing him do this…I knew that I could do it.”

By their example, his parents had already instilled in him a sense of working for the greater good, “to be involved and serving something higher than yourself,” he explains. His mother would remind him that when meeting his maker, he’d be asked “not what you’ve done for yourself, but what you’ve done for others.”

On Transy’s campus, the international affairs major (with a double minor in political science and Spanish) also serves as a Pioneer Pathway mentor and as vice president for the Interfraternal Conference. He is a member of Delta Sigma Phi, plays cello in orchestra and is producing an album for singer and classmate Zenoviah Walker.

By working with the Department of Public Safety, helping the Office of Admissions recruit minority students, and creating Taste of Soul, an event that welcomes the entire campus, Neal says he and BSA are working toward his ultimate goal of “Transy being that inclusive home to everyone.”

In the process, he wants his peers to learn that it’s OK to ask for help—to partner with other student organizations and administrators, including the president’s office.

When President Carey offered to support Taste of Soul, Neal remembers feeling the magnitude of the gesture. “Presidents of schools don’t normally reach out to organizations and say ‘I’m here to help.’”

That help has expanded significantly with the additional presence of Taran McZee, associate vice president for diversity and inclusion, and Te’Asia Martin, assistant director of diversity and campus engagement. Neal says they have made all the difference between his first and second year.

The ordinary pressures of college life can take their toll on students. Add to that the challenges and energy expended by being a person of color—whether as the lone representative in a TV studio or roomful of elected officials, or as a young black man walking across a campus—and the need for support magnifies quickly.

“Transy has equipped me with the necessary tools to go out and make effective change in my community,” Neal notes. “Te’Asia and Taran have done a lot, too. They’ve reignited that spark back in me,” he acknowledges, noting that he’s often in their offices recharging his energy and motivation and gathering support.

“Just seeing successful black people here at Transy is a thing that will help me in life,” he explains. “That’s something that we as black males don’t see a lot of in person. That is a very big thing for me,” he adds. “Those life examples really matter.”