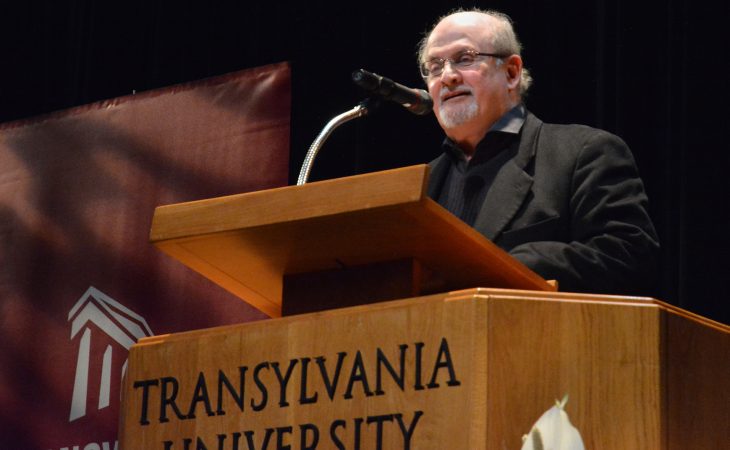 Reflecting on this year’s campus theme of “On Civility,” Rushdie stressed the importance of sharing ideas, fighting for free speech, arguing respectfully and standing up to hatred as the world navigates a particularly uncivil time in its history.

“I am a language person—words are my only tools,” he said. “So I firmly believe we need to talk to one another across the various divides to get better at doing it than we have been of late—to say our piece and hear others say theirs.”

In order to effectively share and debate, Rushdie said, our society must develop a “thicker skin,” with which we become unafraid to hear differing opinions and recognize the value of speech and debate. He recounted a story of being portrayed in a film as a monstrous villain, gleefully torturing his victims. The depiction was so slanderous that the British Board of Film Classification considered banning the release of the film for fear that Rushdie would sue for libel. Instead, Rushdie wrote a letter to the BBFC giving up his right to legal recourse, believing that the freedom to make the film was more important than the attacks against his character.

Throughout the lively, provocative and often humorous presentation, Rushdie lamented the societal divisions in America and abroad, noting that both sides of the aisle have played a role in stifling progress toward understanding and unification. But the writer remained hopeful that we can overcome our differences not just through political debate, but also through literature.

“I believe that literature, the art of the novel, has as its subject that great constant—human nature, what we have in common,” he said. “Literature shows us that we are far more alike than we allow ourselves to think. We have the same needs, the same hopes, the same weaknesses and strengths. Literature has always known this.

“We may yet find our way back to one another and reestablish the common ground on which a stable civil society must stand.”

Rushdie’s novels include “The Satanic Verses,” “The Moor’s Last Sigh” and Booker Award-winner “Midnight’s Children.” He has won a number of literary prizes and received a Queen’s Knighthood for his contributions to literature.