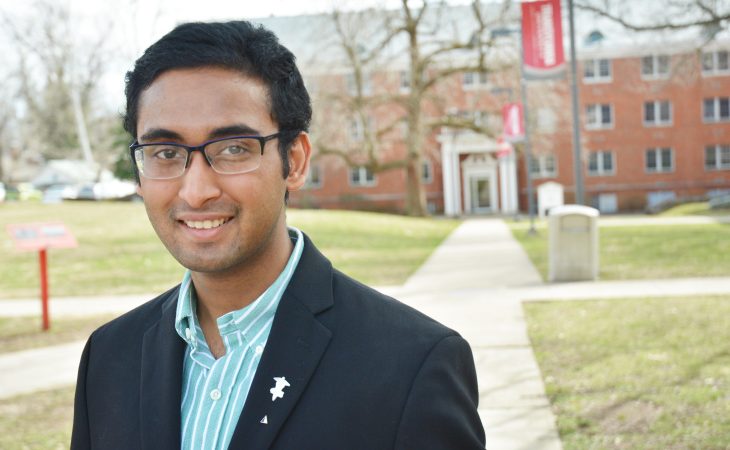 Pioneers are known for their commitment to service and leadership. Among them, sophomore biology major Sameer Ahmed is respected for his quiet leadership in multiple programs and organizations. He thrives in a collaborative environment in which he offers support and chooses to speak up when the situation demands it.

In his short time at Transy, Ahmed has discovered how easily one opportunity leads to the next as faculty, administrators and students get to know him. Their ability to connect him to the person or organization that is right for his academic and personal growth couldn’t be more organic.

In Interfaith Alliance, the first organization he joined as a first-year student, a senior recommended him to the debate team, which ultimately helped him structure his thinking and his essays. An administrator then put him in touch with Pioneer Pathway, a college empowerment program in which Transy students mentor traditionally underrepresented teens through the college application process. As the first in his family to enter college in the U.S. (his parents are from Bangladesh), he enjoys passing along the kind of guidance he received from others.

Ahmed recognizes how much Transy’s size and approach have to do with all that he is able to accomplish on and off campus.

Ahmed also serves as a senator and constitution chair for student government and as the vice president of finance for Phi Delta Epsilon, the campus arm of the co-ed international medical fraternity. All the while, the pre-med student conducts research on quantum dots with his professor and will be presenting at the American Chemical Society conference in Orlando, Florida, this April.

“I’m looking at how the size of quantum dots affects the way they absorb and emit different spectra of light,” he says of the nano-crystals that can “absorb and emit a lot of energy.”

Always interested in many subjects, he’s found that at Transy “my grades are better than at any other time in my life. I fit in better here than anywhere else. I guess it’s my personality working well with Transy. I think it’s the liberal arts approach.”

Eventually, Ahmed would like to be a physician rather than a surgeon, he says, partly because he is drawn to having more interaction with patients. His vision incorporates the variety and breadth of his liberal arts training.

“I think about doctors in the old-fashioned way,” Ahmed explains, imagining his role in the future, “as someone who is well-versed in a lot of things: knowledgeable in general, a good healer, able to contextualize what he’s doing fundamentally within society, and a community leader.

“That’s something that really appeals to me.”