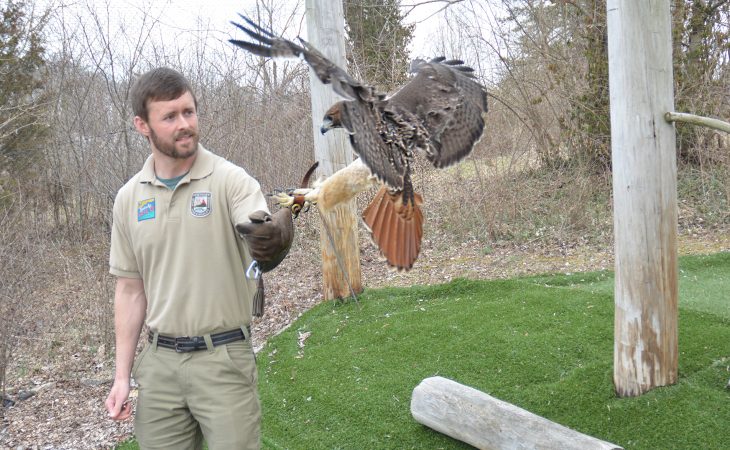 As nearby turtle tanks burble, Geoff Roberts pulls a coiled corn snake from an aquarium.

Even up close, it’s immediately evident the docile creature with beautiful orange markings is nothing to be afraid of. Roberts explains how encounters in controlled settings like this one in the Salato Wildlife Education Center can help people overcome their snake phobias.

That isn’t the main reason Roberts, a conservation educator and 2007 Transylvania University grad, shows animals to visitors. It is, however, an example of how his psychology degree still comes in handy.

People often are surprised to learn about his undergraduate major, seeing as how he works for the Kentucky Department of Fish & Wildlife.

Roberts even once pursued a master’s degree in mental health counseling at Eastern Kentucky University. But that’s not where his lifelong passion lies—he discovered a love for wildlife as a young boy during excursions with his grandfather in the countryside near Elizabethtown, Kentucky.

Thing is, during that time at EKU he felt like he’d already invested a lot of time into psychology, so it would have been a waste to not continue along that path.

He changed course, though—maybe in part because of his liberal arts background at Transy, which encourages students not to get stuck in mental ruts, and in part because his mom encouraged him to follow his dream. The turning point was when he switched master’s programs to study recreation and park administration. “I knew if I didn’t change what I was doing, I’d probably regret it for the rest of my life,” he says. “If you are open-minded and you are passionate about something, then go do it.”

In addition to the recreation and park administration degree, his experience at Camp John Currie near Benton and volunteering at Salato helped him along his path. Knowing that working for little or no income can later have big payoffs, he offers this advice to students: “While you’re in school, volunteer and intern as much as you can, because it’s going to give you really valuable, relevant, hands-on experience—and it’s how you meet people; it’s how you make connections.”

After he earned his master’s, he worked for Kentucky State Parks as the naturalist and recreation supervisor. “Anything fun you would come to a park to do, I was in charge of putting it on,” he says. Roberts liked the job, but there were no animals, and he really wanted to work with wildlife.

When the conservation educator position at Salato opened up six years ago, Roberts had an edge because of the connections he’d made as a volunteer and because he was familiar with the Frankfort facility.

He educates, entertains and inspires the many visitors who come to the center (some days that means 1,000 kids before lunchtime). He teaches them about native Kentucky wildlife and the role of the KDFW, which promotes conservation and game programs through sales of hunting and fishing licenses. Roberts, for instance, stresses the importance of deer hunting, which keeps herds at a healthy size in the absence of predators.

He also trains animals, maintains hiking trails and works on marketing and special events throughout the year.

Perhaps the best example of how following his passion has payed off is that Roberts is in charge of Salato’s captive raptor program. Birds are his favorite animal—they have been since his grandfather introduced him to bird watching way back when.

His close rapport with a one-eyed red-tailed hawk is obvious as he walks down a hill outside the wildlife center. It’s perched on Roberts’ leather raptor glove until he gets inside a large aviary enclosed by a net. The hawk hops onto a perch, and then Roberts walks about 20 feet away and calls the bird, which immediately flies to him and gobbles down a dead mouse.

“To have a job where I get to work hands-on with my favorite animal—that’s pretty cool,” he says. “I took the long way to get here, but I got here.”

Roberts goes on to offer advice for people who feel like they’re on the wrong path. “Identify what you’re passionate about. Become passionate about something—that’s what life is all about.”