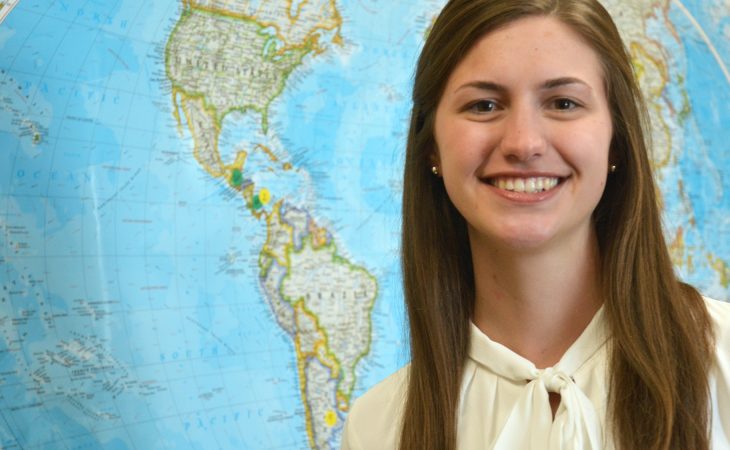 Courtney Smith has visited 83 countries in her lifetime. That makes her a wise elder in terms of travel experience. She is, in fact, a 2016 Transy graduate who, after serving as a Fulbright English Teaching Assistant in Slovakia and earning a master’s degree from George Washington University, is returning to campus as the new director of global and intercultural engagement.

Smith’s zeal for travel rivals her mission to inspire the same curiosity in others. She wants everyone to share in those life-altering opportunities that can only happen abroad. She knows from her vast experience with intercultural engagement that, “unless you experience a different culture, you’ll never fully understand your own.”

Smith became entranced by the idea of international travel at an early age. Her grandparents would return from their worldwide excursions bringing her dolls and stories from countries she had yet to imagine. Later, she accompanied her parents and grandparents on trips abroad and welcomed an exchange student from Barcelona when she was in high school. But it was the 10 days she spent on her own with the exchange student’s family in Barcelona that first revealed the power of immersing herself in another culture.

“After that I was hooked,” she says, noting how the experience developed her independence as a person and a thinker. “Before my travels, I would see things only through the lens of what my family taught me, or what the news and school taught me.” But, she adds, “It’s important to question your own culture and beliefs as well as learn about others.” She would never get to know the world, she realized, unless she experienced it for herself.

As a student at Transy, Smith explored Ukraine and Poland on summer programs, Israel during May term and Guatemala on service trips during alternative winter breaks. In the second semester of her sophomore year, she visited 15 countries on a comparative study abroad program aboard a ship. Called Semester at Sea, the floating university provided the perfect opportunity to complete her general course credit requirements, including marine biology.

Even with all of that travel, the psychology major from Cincinnati remained a member of the volleyball team all four years at Transy and was an active member of Chi Omega sorority and the president of the Greek honorary society Order of Omega. It’s a point she wants all Pioneers to understand; that leaving campus for these extraordinary experiences will not keep you from remaining connected and being able to flourish on campus when you return.

Smith is devoting her professional life to making sure other students get to have intercultural opportunities like she has. Helping them be prepared for the global workforce is part of the work.

“I think that with the world’s growing interconnectedness and with business and job markets being so global, it’s very important that students know how to communicate interculturally and to be able to show a future employer that they can live up to the expectations of the changing workforce,” she notes.

But beyond the career aspect, it’s really about challenging the person, becoming whole and, more broadly, about improving the world’s capacity for understanding and getting along. It’s why Smith returned to her alma mater and is eager to show Pioneers the difference between being a tourist and a traveler, someone who digs in and gets to know the place and people.

As part of her master’s degree in education and human development, with a concentration in international higher education and exchange, she served as an express advisor in the Office for Study Abroad at George Washington University, studied sustainable tourism in Bali and worked in Chile for EducationUSA, a State Department program that works with international students who hope to attend universities in the United States.

“I wanted to come back to Transy because I truly believe in the liberal arts model,” she notes. “Study abroad or any type of intercultural engagement is very important to the formation of a well-rounded person with a broad knowledge base, which is the goal of a liberal arts institution. So, to be back at an institution that values that is something that I cherish.”

Her advice to anyone who is hesitating to go abroad or feeling too comfortable at home? Make the most of these opportunities while you have them. Stop by the office in the Center for Academic and Professional Engagement and let staff guide you in finding the right program and getting the best experience out of it. Then work with Career Development to translate those experiences into skills on your resume that give you a competitive advantage.

“Just do it,” Smith says, beaming with enthusiasm. “There’s so much to be gained from learning in a different environment. Friends, professors and activities will still be here when you come back.”