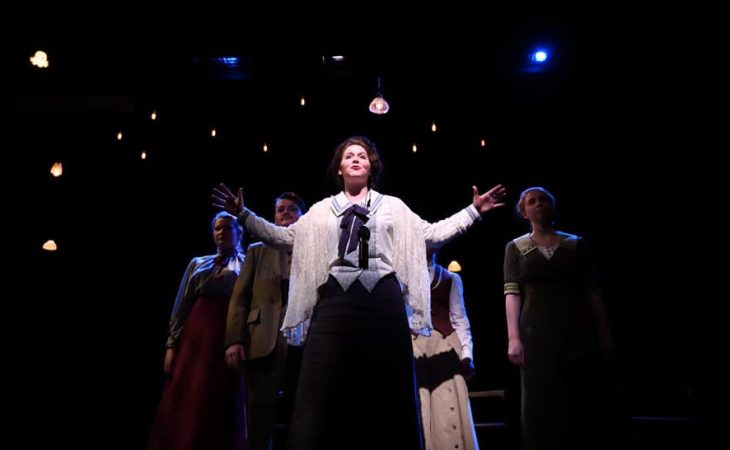 What now seems like eons ago, Tosha Fowler and I began a conversation about the possibility of my directing a show for Transy Theater. To that end, we read and for various reasons, rejected dozens of possible scripts. Until Tosha sent me a play called “Silent Sky,” written by a friend of hers, a playwright named Lauren Gunderson. And boom! (a word Gunderson is fond of using in her colorful stage directions) that was it. Search over.

What made me so immediately connect with “Silent Sky”? That it shines a light on a tragically overlooked woman scientist who figured out a crucial relationship which enabled us, for the first time in human history, to measure the universe? Absolutely. The story of Henrietta Swan Leavitt, told with heart and humor and humanity, instantly captured my attention and fired up my imagination. I had never heard of this woman before, and the thought of having some part in making her story known to a wider audience – especially to young women – was irresistible.

It was only when the rehearsal process began that another stellar attribute of Gunderson’s story revealed itself to me. Living as we do at a time when the border between fact and opinion has never been more porous, when so-called news has devolved into partisan punditry, when the leaders of the land spout alt truth and sports stars proclaim the earth is flat, the opportunity to spend time in the company of those engaged in the simple act of measurement, was a real breath of fresh air. A little known group of female “computers” toiling in an airless workroom in the Harvard Observatory at the turn of the 20th century, turned a precise, patient, persistent accumulation of data into nothing less than a catalogue of the stars. And for one of them, the remarkable Miss Leavitt, this data became a springboard to one sublime, soaring moment of insight that forever changed the way we see the cosmos.

In her script, Gunderson quotes Leavitt’s colleague, Annie Jump Cannon, as saying, “In our troubled days it is good to have something outside our planet, something fine and distant for comfort.” She was speaking of the First World War, but in our troubled days, when truth and fact are under attack, I find it immensely reassuring to be reminded that somewhere behind the scenes, fine minds like those of Henrietta Leavitt, Annie Cannon and Willamina Fleming, are working with quiet determination to help us better understand the world we live in and the universe on our doorstep, which in turn sheds light on the existential questions of who we are and where we came from.

About the author: Ave Lawyer is the guest director for “Silent Sky.”

Written by Lauren Gunderson and directed by Ave Lawyer, “Silent Sky” runs through March 3 on Thursdays, Fridays and Saturdays at 7:30 p.m. and Sundays at 2 p.m. Reserve free tickets here.