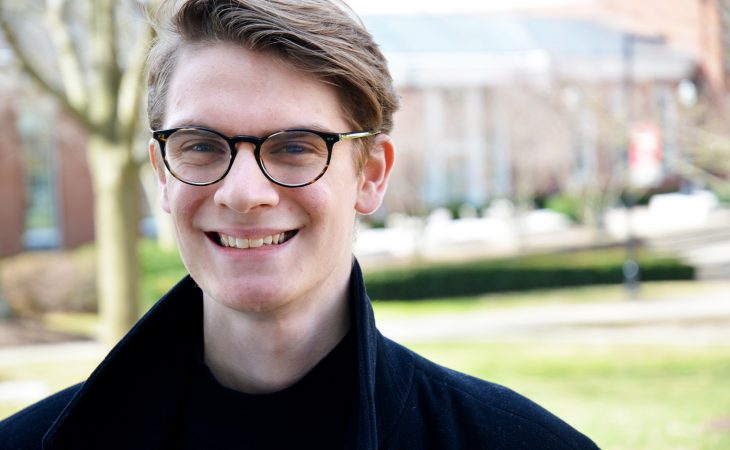 As a boy in Arkansas, Seth Wyatt’s enquiring mind led him to step outside the more established Christian denominations around him for the beliefs of Pelagius, a fourth-century ascetic monk and proponent of free will. Pelagius may have lost his debate with St. Augustine and been condemned as a heretic, but Wyatt ’21 intuited something genuine in the monk’s approach that resonated with his desire to “walk the walk” of his Christian faith. He also learned something about what it means to live and believe outside the majority.

“I’ve always been deeply interested in theology and how stories motivate people and how religion is powerful enough to inspire the best and the worst of what humanity has to offer,” says Wyatt, president of Transy’s Interfaith Alliance.

In his short time at the university, Wyatt has stepped up and into the opportunities presented to him, developing as a leader while serving and advocating for the larger community. “There are endless possibilities for students who want to come in and make an impact on campus,” he says.

As Transy works to become a more diverse campus community, Wyatt is committed to representing all religious traditions on campus and creating an inviting, respectful space for individuals to share their perspectives.

The Interfaith Alliance, which is a service-minded organization, welcomes every faith and mindset into conversation—believer and non-believer—in what Wyatt describes as “embodiment dialogue.” The goal of the meetings, he explains, is to engage everyone as individuals rather than abstractions or token representatives of particular belief systems. Choosing broad themes for discussion—such as creation myths or rituals—keeps the conversation open and inclusive.

“When you have a religious dialogue, you have to honor and respect the person you’re dialoguing with and the truth claims, traditions, rituals and beliefs of that person,” Wyatt explains. “I prefer a method where we say, ‘there is such a thing as Truth and everyone has a claim to some part of it…and we’re all equal.’ When you have that mindset, you welcome everyone to the table. That’s the method that brings true diversity and I think that’s something that Interfaith is uniquely suited to.”

A problem-solver by nature, Wyatt sees the potential for a broader application of this approach. “Because we live in a digital age, it’s easy for people to conceptualize each other and to make each other into abstracts, and then to essentialize each other,” he says. “It’s something that embodiment language and dialogue directly fights against.”

Wyatt sees Transy’s intimate campus as an exceptional place for opportunities to serve and to build an inclusive, respectful community. It’s small enough that everyone gets a sense of each other, whether in class or across the dining table or engaged in community service.

“Advocacy and service train you, especially the way that Interfaith does it, to look at the individual you’re talking to as an important person. I think it’s very important and very valuable that there’s an institution uniquely suited to address this problem.” The same institution also provides the opportunities for Pioneers who are interested in leading and serving to truly live out their interests.

“At Transy, the student organizations are small enough and personal enough that when you get involved in one, you can really sink your teeth into it. I have countless friends from my sophomore class who are in leadership positions because they came in and they saw what they could get passionate about and involved in—and now they’re deeply involved.

“Transy is fertile soil for people who really want to make an impact and do something about the problems they see—whether on campus or off.”

Transy’s Interfaith Alliance welcomes everyone to meetings on Wednesdays in Rosenthal Commons from 5-6 p.m.