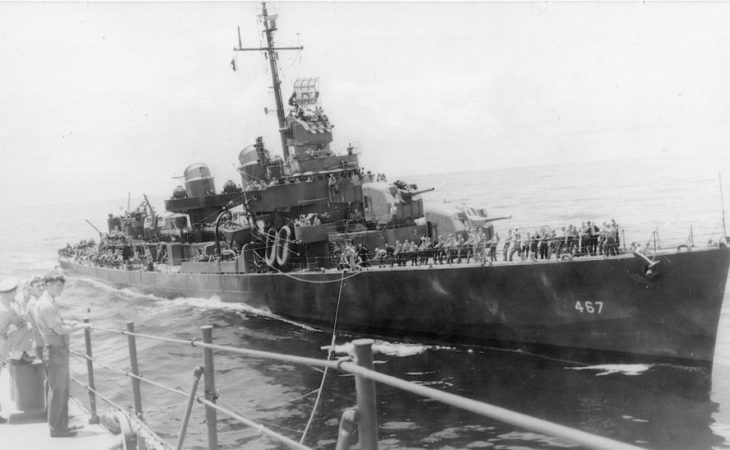 Just after midnight on July 5, 1943, the USS Strong, a destroyer in the U.S. Navy’s World War II fleet, entered Baikoro Harbor in the Solomon Islands ahead of a larger American force. Within the hour, the ship, carrying more than 300 sailors, was torpedoed and sunk. Forty-six men went down with the ship, including a young officer, Ensign William C. “Billy” Hedrick Jr., a 1940 graduate of Transylvania University.

Now, 76 years later, the R/V Petrel and its team of researchers, engineers and explorers have located the ship, which until this month had been lost at sea. According to the R/V Petrel website, wreckage from the USS Strong was discovered on February 6, 2019, nearly 1,000 feet below the surface, resting on the floor of the Kula Gulf in the Solomon Sea.

“With each ship we find and survey, it is the human stories that make each one personal,” Robert Kraft, expedition lead and director of subsea operations for the Petrel, said in a news release announcing the discovery. “We need to remember and honor our history and its heroes, living and dead. We need to bring their spirit to life and be grateful every day for the sacrifices made by so many on our behalf.”

Kentucky’s Billy Hedrick was one of those who made the ultimate sacrifice aboard the USS Strong.

Hedrick was one of 14 children born to William Clay and Emma Manley Hedrick of Mount Sterling, Kentucky. He entered Transylvania as a freshman in 1936 on a full scholarship and excelled in his studies. An article in his hometown newspaper after his sophomore year described him as  “…possibly the most outstanding college student in Lexington, or in the State of Kentucky.” It went on to say that he “…has made a remarkable and most unusual record, both years he has attended the college….getting all As in all his classes, and is the only student in the college with such a wonderful record.”

Hedrick was a member and officer of Phi Kappa Tau and worked on the staff of The Crimson, serving as editor in chief his senior year. He was also member of the Pi Kappa Delta honorary forensic fraternity and secretary-treasurer for Sigma Epsilon, an honorary literary fraternity.

Just past midnight on July 5, 1943, the Strong, with Hedrick aboard, was hit by a Japanese long lance torpedo in the Kula Gulf. During the rescue operation, another ship, the USS Chevalier, rammed the Strong, collapsing part of the destroyer’s superstructure and trapping Hedrick, who was below decks destroying classified files. Forty-six sailors perished when the ship went down; more than 230 were rescued. Hedrick was posthumously awarded the Silver Star.

“B.J. helped me in the archives as I searched for information on my uncle Billy. There were volumes of newspapers I looked through from 1936-1940 to find snippets of information on his life there and I found much,” Johnson explained. Her work to uncover Hedrick’s time at Transy was featured in the spring 2010 edition of Transylvania Magazine (see page 24).

Johnson says there are both “no words and too many words” to describe the news that the USS Strong’s wreckage and her great uncle’s final resting place has been found.

“How does a person really process something like this? This has been an ongoing project from the first time I saw the brass plaque honoring him on the back of the family headstone in Mount Sterling,” Johnson said. “A Google search in 1998 got me started on building a project. It’s taken over 20 years, but it’s been worth every minute.”

Hedrick is one of 39 Transylvanians who lost their lives in service to their country during World War II, and his memory still lives on today. After his death in July 1943, Phi Kappa Tau established the Hedrick Cup, an award still given each year to the fraternity member who achieves the highest academic standing.

For more on Billy Hedrick and the USS Strong, click here to visit the Project USS STRONG DD 467 website created by Tammi Johnson.