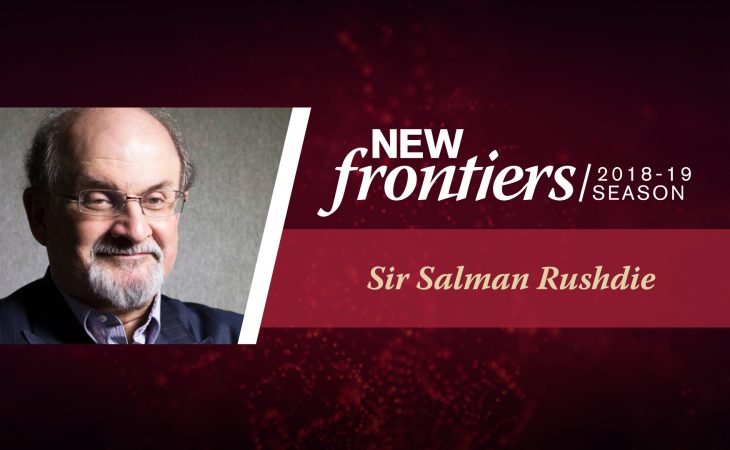 The public is invited to this free event at 7:30 p.m. in Haggin Auditorium. Reserve tickets here.

A powerful literary artist who has shown sweeping creative courage even against threats to his life, Rushdie exemplifies the theme of Transylvania’s 2018-19 academic year: “On Civility.” This also is the topic of his lecture.

The writer’s visit is one of the main events in the university’s inaugural New Frontiers season, which asks the campus and surrounding community to go beyond the familiar and explore ideas, art and music.

“We are honored to have for this year’s Kenan speaker Sir Salman Rushdie, whose immense literary talent and courage sparked an international dialogue on civility,” President Seamus Carey said. “The event is one of the highlights of this academic year and our New Frontiers series. We look forward to exploring new and challenging ideas with our community.”

Rushdie has authored 13 novels, including “Midnight’s Children” and “The Satanic Verses.” His books—which have won numerous awards, including the Booker Prize, Writers’ Guild Award and Whitbread Prize for Best Novel—have been translated into more than 40 languages. His recognitions also include the Ordre des Arts et des Lettres—France’s highest artistic honor—and the Edgerton Prize of the American Civil Liberties Union.

In addition to being a New Frontiers event, Rushdie’s lecture is part of Transylvania’s Creative Intelligence Series, which also focus on civility. This year’s events have included a Grammy-nominated oratorio about Matthew Shepard and a discussion with Dylan Marron, an award-winning podcaster who chats with people who have been hostile to him online.

“My hope is that the Creative Intelligence guests to Transylvania’s campus will give us tools and inspiration to expand our sense of civility and to put it in action,” said Zoé Strecker, an art professor and director of Creative Intelligence and special academic programming. “It is a tremendous privilege to share these constructive experiments with the community at large.”