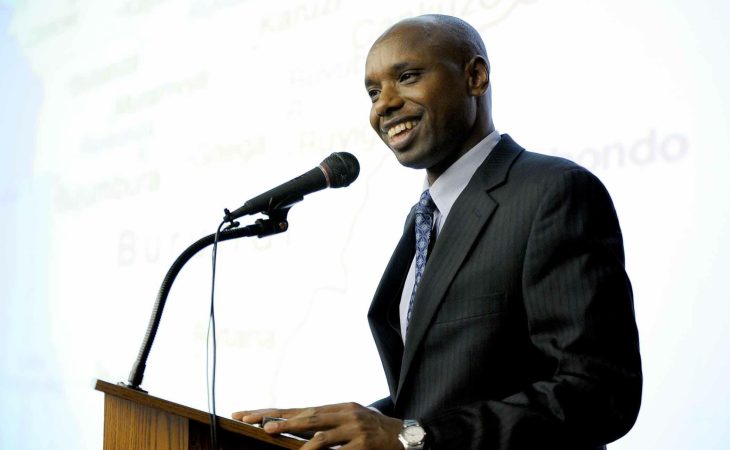 Deogratias “Deo” Niyizonkiza, a leading advocate for the world’s most impoverished people and founder and CEO of Village Health Works in Burundi, will deliver Transylvania University’s commencement address on May 25.

Niyizonkiza’s speech will cap off an academic year focused on the theme of civility, which is not just an abstract concept to him—but a matter of life and death.

The Burundi native fled the killing fields of his homeland in the early 1990s to New York, where he lived for a while in Central Park before learning English and completing undergraduate degrees in biochemistry and philosophy at Columbia University. He then attended Harvard to study public health and Dartmouth for medical school.

Niyizonkiza returned to Africa to start Village Health Works, a community health center in an area with limited access to quality medical care. “Upon my return to Burundi, it was the sheerest form of civility—uniting formerly warring people to turn enemies into a new community of forgiveness, collaboration, healing and hope—that became Village Health Works,” Niyizonkiza said. “It was the result of turning swords and guns into shovels and plows, where clearing land, making bricks, laying roads and planting gardens became a living testament to civility and community in triumph over conflict and chaos.”

Other guests speaking on the theme of “On Civility” at Transylvania this school year include author Salman Rushdie and internet sensation Dylan Marron, whose popular podcast features chats with people who have been hostile to him online.

Transylvania President Seamus Carey recognizes the central role of civil discourse in the educational process. “As our graduating seniors prepare to embark on their lives after Transylvania, they will take with them the wisdom of a man who embodies the value of civility,” he said. “We are honored to welcome Deo Niyizonkiza back to campus for our commencement.”

The ceremony will take place on Old Morrison Lawn beginning at 9 a.m.

“I am so proud to be taking part in the graduation ceremonies at Transylvania University, where community service is so highly valued and where students are taught to become citizens who are not just out to make a living, but who are living to make a difference through great ideas and actions that speak to all humanity,” Niyizonkiza said.

A frequent lecturer on global health, he has received numerous recognitions, including being named among the Carnegie Foundation of New York’s 2016 Great Immigrants: The Pride of America. He also received the 2016 Presidential Medal: Amities des Peuples (Burundi), and the 2014 Dalai Lama’s Unsung Heroes Award.