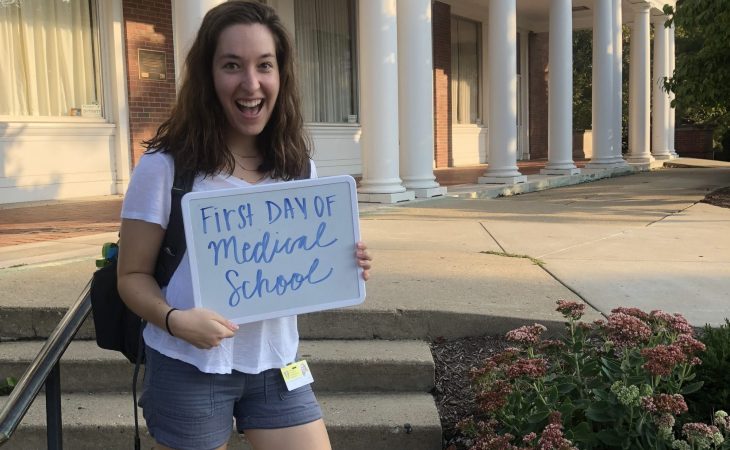 A student at Ohio University Heritage College of Osteopathic Medicine, Ana Aguilar ’18 took a short breather to answer some questions about how Transy prepared her for a successful start to a demanding first year of medical school.

Originally from Loveland, a suburb of Cincinnati, Ana Aguilar remembers first hearing about Transy from a guidance counselor who told her about Transy’s “awesome science program and great stats for getting accepted into medical school.”

But it was the visit to campus when, she says, “I fell deeper in love with the university and I saw the tight-knit community for myself. I also really appreciated the liberal arts education that Transy offered; none of the other schools I was looking at offered such an education. I was pretty smitten and the rest was history.”

Medical school is hard. I am currently studying for around 12 hours a day while still attending classes and the occasional meeting. We do about a semester of information a week, which is a lot. On top of that, my program at OU-HCOM is trying out a new self-directed curriculum, which means that we do a majority of learning on our own. Even so, I love every minute of it.

How did Transy prepare you to be admitted to medical school?

The pre-med track at Transy is quite rigorous. But, for good reason! The MCAT was a difficult test to take, but my science background through Transy definitely prepared me more than test takers from other schools. The Pre-Health Advisory Committee at Transy makes all pre-med students do an interview with them so that they can write a recommendation letter. That interview was actually more nerve wracking than my actual interviews.

Why did you decide on osteopathic medicine?

I dreamed of being a doctor for a long time, but had never actually heard of osteopathic medicine until I was deep in my application process. The more I learned about it, the more I appreciated the practice. Osteopathic medicine works more on a prevention basis. Instead of only treating patients when they have fallen ill, osteopathic doctors additionally work with them in order to prevent illness by helping patients change their diet or fitness routines.

How did the liberal arts help to shape you in a way that will make you a better physician?

The education that I received from Transy not only helped me achieve my goal of attending medical school and prepared me for the rigorous classes, but also has made me a more well-rounded person. My anthropology classes have shown me that there are many different cultures in the world and many different points of view. It is not my place to judge others as a doctor, but to treat them to the best of my abilities and make sure that they understand how to take care of themselves in the future. My theater background has also helped me to learn how to improvise and adapt to any situation, something that physicians need to be able to do at the drop of a hat.

Transy teaches its students skills for their future careers, but also helps them to become better people.

How did your level of preparation compare with that of your cohort?

Through Transy I was able to shadow doctors in Spain and was one of the 12 fellows who went to Talavera de la Reina. I was [surprised] by the other fellows’ lack of understanding when it came to some of the medical terms and processes. I had learned many of the terms in my first year biology class at Transy and had incorrectly assumed that the other fellows came in with the same level of information that I possessed.

A year later, I worked at a summer camp for neurologically different children and again was shocked at the difference in both education and understanding in some of the other pre-meds I met. I knew more about the children’s diagnoses and had an easier time working with the kids due to the open-minded attitude that has been driven into me at Transy. Transy not only teaches its students skills for their future careers, but also helps them to become better people.