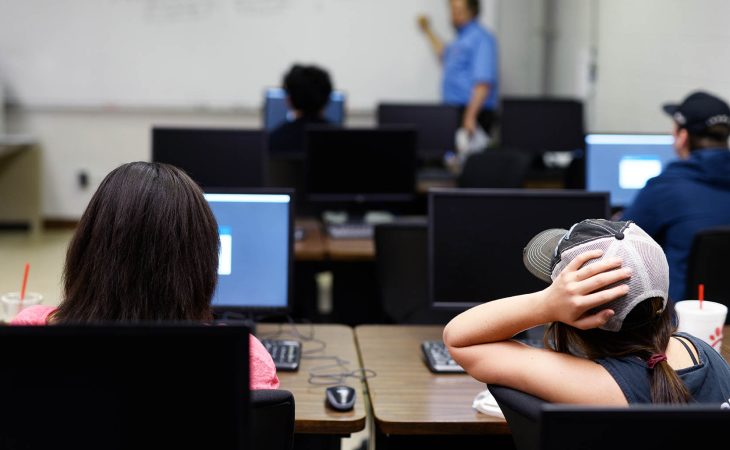 We talk a lot about the critical thinking and problem-solving abilities of Transy grads, but Jason Hobson ’97 now has “solution” in his job title: Cloud Solution Architect – SAP on Azure at Microsoft. He helps large corporations migrate their IT infrastructure to Microsoft’s Cloud, known as Azure. In guiding these mammoth transitions, Hobson finds himself tapping into the foundation he built at Transy and the internship at IBM that he secured with the help of his professor.

“My internship in my junior year became a fulltime job at IBM and set the direction for my whole career,” Hobson explains. The expertise he developed in SAP, “an enterprise resource planning package that big companies use to do everything from human resources to purchase orders,” began in his work at the IBM help desk supporting the application. It grew through 18 years of consulting for Procter & Gamble and now flourishes as part of a multinational team in Microsoft’s Customer Success Unit that works with global corporations.

Hobson, who grew up in Pikeville in Eastern Kentucky, lives in Portland, Oregon. He says his ability to succeed is the result of a combination of skills and experiences he gained at Transy. “The best skill I developed was troubleshooting and being able to take a problem and break it apart,” he adds.

“The computer science program really helped me understand technology and get better at diagnosing problems and seeing the big picture,” he notes. But it’s the context of the liberal arts and the ability to communicate that have been equal partners.

I think the liberal arts married with the technology side is the foundation I come back to… It’s my ability to meet a new customer and not only talk about the technology, but to listen and communicate clearly.

“The liberal arts background has been absolutely critical to the modicum of success I’ve had in my industry,” Hobson says. “I think my time at Transy was not only pivotal from a computer science element, but from the breadth of classes I had outside of Brown Science Center. Transy helped broaden my perspective.”

Hobson remembers how Transy’s professors taught him the essential soft skills for success along with the hard. “I go back to that first class with Don Dugi. It was that moment that just sticks with me,” he says, recalling the challenge “to think beyond my narrow view of the world to this larger spectrum of not only people but ways of thinking and ways of looking at things.” He laughs as he describes how it “just kind of cracked my little mind open.”

Hobson invites students who are contemplating college to consider Transy for the quality of education it offers and how it “includes social education—how to interact with people and how to think outside of your box.” At Transy you do this “in an environment that cares about you, that wants you to succeed and sets you up to succeed.”

His career illustrates his claim. From his graduation during the dot-com explosion of the late ‘90s through the mass migration of data centers to the cloud, Hobson has been able to grow and thrive no matter the transformation in his field. “Transy,” he concludes, “has been monumental in building the foundation I’ve used throughout the years as Information Technology has rapidly evolved.”