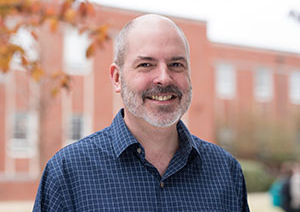 Professor of Physics Jamie Day is lending his expertise to the Transy Theater Program’s upcoming production of “Silent Sky” by Lauren Gunderson. The play centers around little-known historical figure Henrietta Leavitt and her dogged pursuit of understanding the stars. Student actors and production members have used the professor as a resource for all things science related in the play. Below, Day examines some striking themes surrounding the story, as well as the enigmatic Henrietta Leavitt. We hope you join us for a starry night at the theater. Click here for free tickets and show dates and times.

How do we measure things we cannot touch? Having two eyes really helps, because, to see near things, they focus at different angles (we go cross-eyed!) than when looking at distant objects, and our brains automatically interpret this to gauge distance. But this doesn’t work for things that are very far away. In this case, the best option is to move around. Think back to when you were a child in the back seat of a car. Mailboxes and trees near the road zoomed by, but houses in the distance appeared to move slowly, and the moon never seemed to move at all.

Millennia ago the ancient astronomers tried to use this method—known as parallax—to measure the distance to the stars, but no matter how far they moved, the stars seemed to remain fixed. (Of course stars appear to rotate collectively as the earth turns, but the stars in the handle of the big dipper, for example, always look the same.) It wasn’t until the early 1800s that astronomers finally managed to observe the very tiny apparent motions of the nearest stars as we moved 180 million miles around the sun. And the distance they calculated to the nearest stars was staggering: tens of trillions of miles!

A century later, in the early 1900s, astronomers had only managed to measure the distance to a few dozen stars. To measure further, we needed a new tool, and an unassuming woman working as a “computer” at the Harvard Observatory found one! Henrietta Swan Leavitt studied stars in the Magellanic Clouds: small, irregular galaxies that neighbor the Milky Way. These aren’t visible in the Northern Hemisphere, so Leavitt spent her days staring at photographic images recorded through telescopes in South America. Since the billions of stars in the Magellanic Clouds are roughly the same distance from us, she knew stars that looked brighter actually were brighter, and not just closer to us. In particular, Leavitt studied stars whose brightness pulsated over a period of days or weeks. She identified nearly 3,000 of these “Cepheid variable stars” and began to notice a trend. Just as big bees buzz at lower frequencies than little bees, the biggest and brightest stars pulsated at lower frequencies than the smaller, dimmer ones.

This correlation was so simple and so strong that Leavitt was able to mathematically predict the brightness of a star based on how quickly its brightness oscillated. Astronomers began to look elsewhere in the universe for Cephid variable stars and to use Leavitt’s method to determine the star’s absolute brightness. By comparing this to the star’s apparent brightness (how bright it looks from Earth) they could easily calculate the distance. Astronomers had a new, reliable yardstick to measure cosmological distances, and we’re still regularly using it today, a century after Leavitt’s discovery. In fact, a paper was just published this week describing how astronomers measured distances to thousands of Cepheids to measure how much the Milky Way is warped.

In an era when all of science was dominated by men, the careful, patient work of one woman revolutionized our knowledge of our universe. We will never touch more than a minuscule fraction of our world, but Leavitt’s discovery allowed us to measure half a million times further into space than before, and the impact of her life’s work continues to reverberate!