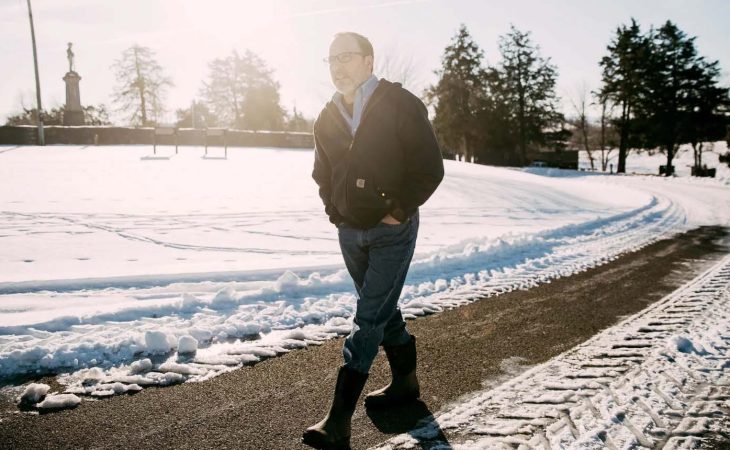 The article, “Poet Maurice Manning: A Voice in the Wilderness,” highlights Manning’s poetry and his storytelling. Author Erik Reece traveled to Manning’s farm in Central Kentucky where the two discussed the Transy writer-in-residence’s life, poems and upcoming book set to release this fall.

The following is an excerpt from the full article, which can be found online at Garden & Gun.

“While at work on his most recent collection, One Man’s Dark, the poet Maurice Manning began to have vivid dreams. In one, he traveled to the Eastern Kentucky farm where his great-grandmother Lillian was raised. Standing in a dark barn, Manning saw sunlight sifting between the old wooden boards. He walked through a dogtrot, then out a door at the back of the barn. A meadow opened up, and there his great-grandmother, dead since 1980, appeared to him—as a little girl. Manning interprets the dream this way: “She was saying, ‘This is where I always am.’” But there’s more. A few years after the dream, to his surprise, Manning became a father for the first time at forty-nine. “I believe it’s some kind of mystical thing that my great-grandmother appeared to me as a little girl,” he says, “and then several years later we have our own little girl rather unexpectedly.” Her name is Lillian.

When I arrive at Manning’s modest white farmhouse in rural Washington County, Kentucky, his wife, Amanda, is just putting Lillian, who is now three years old, down for her nap. An older, infirm Lab mix limps over to me. “Hey buddy,” I say, scratching his head.

“That’s his name!” Manning says, beaming. He flashes a quick smile through a thin beard and leashes a beagle named Cap. Both dogs just wandered into Maurice and Amanda’s lives, owners nowhere in sight. Strays, I learn, are more or less constantly moving through the Manning house.

It’s a gray day typical of Kentucky winters, but Manning, built like a seasoned walker, pulls on a heavy coat, and we, along with Cap, head out to circumambulate his small farm. Behind a generations-old barn, several garden plots spread into a clearing that soon gives way to a woodlot of hickories, locusts, oaks, and hornbeams—signature trees of Central Kentucky. Previous owners had abused the soil, so Manning has slowly been amending it with compost and lime. Last year his okra grew to fifteen feet, though he acknowledges that pruning would have made the plants more productive. “My gardening is very similar to my endeavors in poetry,” Manning says. “None of it is precise, but all of it satisfies a curiosity, even a hope.”

To understand Manning’s decision to put down roots on this twenty-acre parcel of Kentucky’s Inner Bluegrass, you have to go back a few generations. Manning comes from a long line, on his father’s side, of self-sufficient Eastern Kentuckians. “They provided for themselves instead of living on a paycheck,” he remembers. He speaks slowly, deliberately, and one gets the sense that every word is carefully weighed before it rises to the level of speech.”

Read the rest of the article online at Garden & Gun magazine.