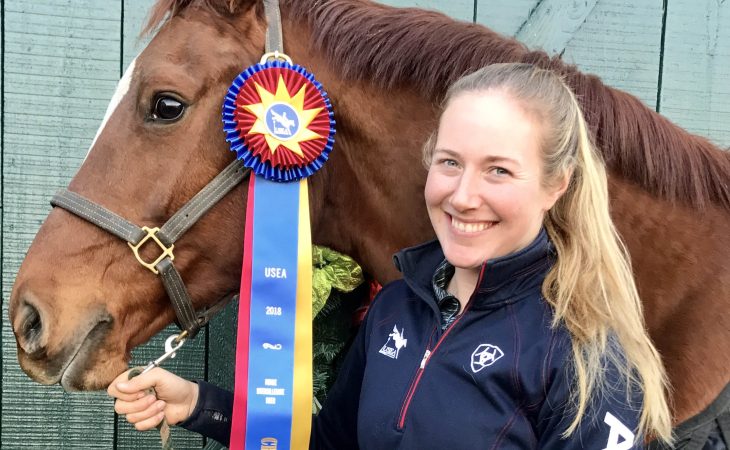 It’s no secret that the Transylvania University Eventing Team has had immense success over the past three seasons.

This past semester, senior Abby Blackburn and her own mount, Dior HH, finished the 2018 season as champions of the United States Eventing Association’s Novice Intercollegiate Division. Blackburn is the first Transylvania eventer to hold this title, a huge accomplishment for both her and the program.

Since the birth of the program in 2011, the Eventing team has had three students place within the top 5 of their respective intercollegiate divisions. Each placement entails a well-earned rating that is recognized at a national level. The Intercollegiate Division of the United States Eventing Association was composed of seven schools in 2012 when Transylvania joined and has since expanded to include over 50 schools, including Division I schools such as the University of Kentucky, Clemson, and Auburn. Riders from these various schools across the country are awarded these rankings by placing well in competitions all season and thus gaining points which help determine these year-end awards.

Here is what Blackburn had to say about her experience as a Transylvania eventer and her teammate, Dior HH.

TransySports.com recently interviewed Blackburn about her experience as a student and athlete.

As a senior, can you tell us about your time at Transy?

How difficult has it been trying to fit both school and eventing into your schedule?

Blackburn: I have to plan my days out in detail ahead of time to make it all work. Dior is a horse that needs to be worked out seven days a week, and I also work a lot and ride extra horses as much as possible, which means I’m at the barn if I am not studying. There’s been a lot of late nights doing homework, and I almost always show up to class in riding clothes covered in dirt. I used to get weird looks but everyone has pretty much come to expect it now.

You have been a captain for four years, what does that mean to you?

Blackburn: It’s been such a privilege to have this leadership role for the last four years. My freshman year, we started with four riders, and by the spring semester, we were down to two. Seeing what the program has grown into in just a few years is amazing, and I’m glad I’ve been here to see that happen.

Describe what is it like to be a part of the eventing team.

Blackburn: The best part about being on a college team is having a group of friends with the same passion for horses. We’ve had a lot of fun together, and they’re all talented riders with great horses.

Explain your relationship with your horse Dior, her personality, what you have done together and what the future may hold.

Blackburn: Dior is incredibly talented. When I bought her two years ago, I had never dreamed I’d ever have anything as nice as her. Sometimes I catch myself just staring at her because I still can’t believe she’s mine. She’s been far from easy to bring along, though. There were so many days I thought I’d never even get her out of the start box on cross county. But she’s grown up so much this year, and I really feel like we’re starting to trust each other. In the barn, she’s such a sweet horse with a ton of personality. I’ll take her as high up the levels as she wants to go!

How is training with Coach Davis?

Blackburn: She’s an amazing coach. I’d had very little formal training when I came to Transy, but she saw how badly I wanted to be successful and has done so much to help make it happen for me. This is a sport of constant highs and lows, and she’s been there for me through all of it.

What are your plans after graduating from Transylvania?

Blackburn: I want to keep working with horses, and hopefully someday ride and train professionally. It’s tough work, but I love it and can’t imagine doing anything else.

How does it feel to be the 2018 Novice Intercollegiate Champion?

Blackburn: It feels great! It’s a small victory in the grand scheme of things, but there’s a lot of really good intercollegiate riders at the novice level, especially at the big Southern schools. Four years ago, I had never even competed at a USEA recognized horse trial, so I’ve come a long way from that.