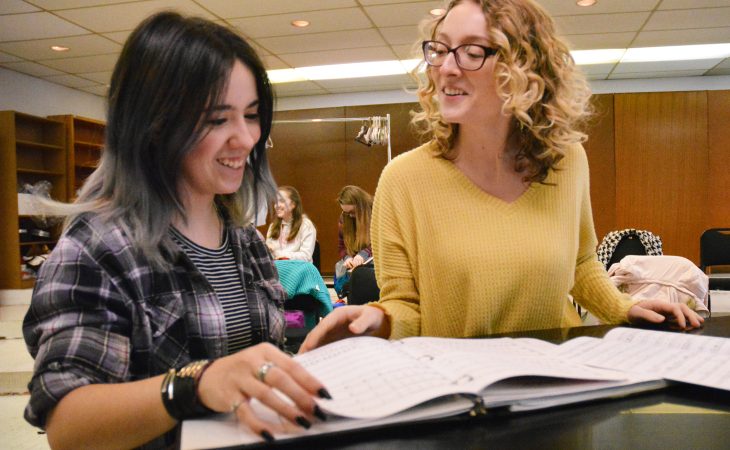 Transylvania University and the community at large once again will be graced with the voices of the school’s female a cappella group.

With auditions next week, first-year student Karisma Keeton and sophomore Emily Maddix are working together to help revive the Grace Notes after a brief hiatus for the group. Both are members of the university’s choirs and look forward to also having a smaller group that performs more pop-oriented music—think Britney Spears as opposed to Bach.

“It’s really exciting to be able to come together in a smaller group,” Maddix said. The format will allow students to pick fun pieces they wouldn’t necessarily be able to perform in a more strict choral setting.

Additionally, the smaller size allows them to travel more easily and often, said Keeton, who also founded a female a cappella group in high school. “We were both really excited because we wanted to get this started again—we think it will be a good addition to campus.”

Another perk of this “Pitch Perfect” type of ensemble is that each singer knows her voice will be heard—almost like they’re singing solo. “That sounds a little scary at first, but it’s actually really fulfilling,” Keeton said.

Grace Notes has performed at a variety of venues, including opening day at Keeneland and the U.S. Citizenship and Immigration Services Naturalization Ceremony on campus. The new group may sing at the university’s upcoming “Cabaret.”

Regan MacNay, Transy’s new assistant professor of music and director of choral activities, said bringing back a “beloved vocal institution speaks to the role of a new director—change, but also drawing upon tradition.”

The new Grace Notes members won’t have to join one of the two choirs—which are the Transylvania Singers women’s treble group and the male and female Transylvania University Choir. “This is a chance for people who love a cappella pop to have a place to express themselves and find a musical community,” MacNay said. “They just have to commit to the tradition and vision of the group and be enthusiastic performers.”

Next up: The university may revive its male a cappella group, TBD or Formerly Known As.

“As the new choral director,” MacNay said, “part of my job is to inspire students to commit to the music program, and one element of this is through a more popular genre of music that is not necessarily part of the choral tradition.”