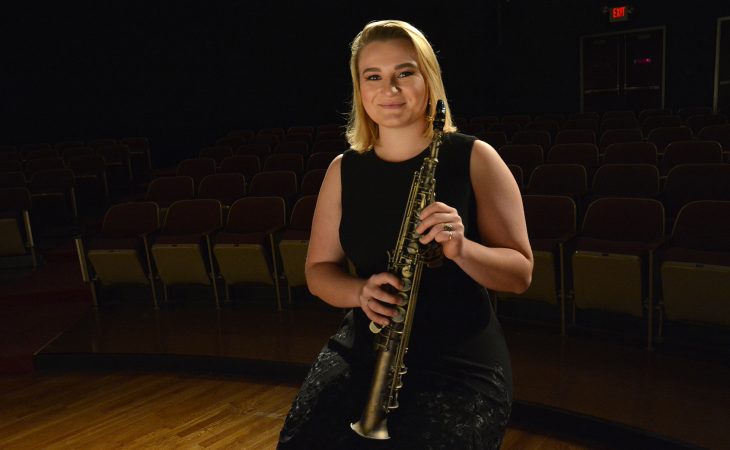 As Sarah Schaaf ’19 stands on the stage of Carrick Theater, the sound soaring from her soprano saxophone suggests she is on a mountaintop singing out to everyone in the valley below.

The piece she performs is unique to her instrument. It’s one of the reasons she has chosen it. In a world of sax repertoire that too often consists of pieces transcribed from other instruments, Ronald L. Caravan’s “Sonata for Soprano Saxophone and Piano” offers Schaaf a work that understands the sonority and technical abilities of the instrument and challenges her musicianship.

The “Prelude” from the Sonata introduces a special kind of freedom by not having bar lines that measure a set number of beats. What might be intimidating for many musicians gives Schaaf the creative opportunity to develop her own timing and phrasing. It is her voice singing through the instrument, in her own time and interpretation, to each audience member attending the end-of-semester general recital on Dec. 4.

“It’s more your own piece,” says the Shepherdsville, Kentucky native. “I really enjoy that.”

As a musician who recently won Transy’s 23rd annual Concerto-Aria Competition, and a studio art major whose work was chosen to represent Transy in a statewide exhibition, Schaaf has been refining and developing her talents in both art forms over the past four years.

“I’ve grown so much,” she says, recalling how timid she was when she first arrived on campus.

Professor Ben Hawkins, director of the music program, remembers Schaaf auditioning for and receiving one of Transy’s music scholarships: “A diamond in the rough,” he recalls, a student of promise with a strong drive to achieve. He’s watched her work hard and become an “elegant player” on a difficult instrument. “Many are called, few are chosen,” he says, musing on the particular challenges of the soprano sax and reflecting on Schaaf’s “silky tone” and the way “her sense of style has matured.”

“Music has always been one of the anchors in my academic life,” says Schaaf, who has been playing since the age of 12. “It definitely takes the most work of anything that I do. It’s a release, too. It helps me in every other thing,” she adds. “It’s important to have that kind of relationship between the book smarts and more artistic parts of your life,” she says of the reciprocal relationship between the skills required and honed for music (including math, teamwork, listening and leading) and the rest of life.

Being involved in music in college was a given for Schaaf, but reaching this level of performance and finding the confidence to major in studio art are among the unexpected gains she made at Transy. The access to classes, teachers and peers secured her future.

“I’ve always drawn and painted,” Schaaf explains, “but I didn’t know if I wanted to do that as a career until I came here and took classes that solidified my path. It’s made a difference being around other people that have the same passion that I do, and talking to professors and knowing that you can make a career in it. Also, just seeing how much my art has developed over the past four years gives me a lot more confidence than I had coming into Transy.”

Schaaf reveals that music and visual arts are her preferred means of communication, the perfect media for expressing and articulating complexity. “It’s also very personal, because you’re playing from inside or painting from inside.”

The magnitude of impact of the arts—both personal and social—is keenly felt by Schaaf. She emphasizes the release through creative expression, of having an outlet for innovation and an individual voice amidst a sea of obligations in the rest of the world, and, ultimately, the ability to connect with others.

“A lot of who I am is because of the arts….I think it makes you a more rounded person to be able to connect the visual arts with the real world, and have that conversation between your experiences and art—whether it’s dance or music or visual art—I think it’s an important part of society and our culture. To be part of that is really an important thing.” Her professional goal is to become a children’s book illustrator.

Performing as a soloist with an orchestra is a rare privilege that requires a certain measure of fierceness along with technical and artistic accomplishment. For 23 years, Hawkins has watched students from many backgrounds and majors earn their way to this once-in-a-lifetime opportunity. Schaaf appreciates the gift and knows she’s ready.

“I’m excited. It’s a new experience. Kind of scary,” she admits, “but it’s really an honor to do that, especially here. The music program has meant so much to me,” she explains, thinking back on the friendships and experiences in concert band and jazz band. “Some of my best memories from Transy are in band,” and the music scholarship that made it possible to attend Transy.

As the winner of the 23rd annual Concerto-Aria Competition, Sarah Schaaf will perform Alessandro Marcello’s Concerto in D Minor, with the TU Chamber Orchestra in Carrick Theater on March 29, 2019.