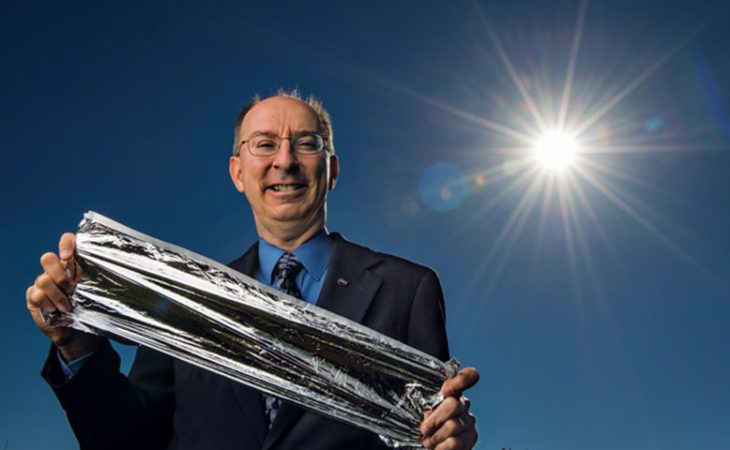 Asteroids and Eastern Kentucky. Hard science and science fiction. Outer space and Earth’s resources. These dimensions—seemingly incongruent on the surface—are integrated in the working imagination of Les Johnson ’84. His liberal arts way of thinking is the bridge. His intellect, wide-eyed wonder and evangelical enthusiasm for deep space are the clinchers.

From the time he was a boy in Ashland, Kentucky, watching Neil Armstrong walk on the moon, he has been in thrall to outer space. Today, Johnson is a technology manager for NASA’s Marshall Space Flight Center and the Solar Sail Principal Investigator for the Near-Earth Asteroid Scout Mission. After hours, he’s a writer and frequent collaborator on popular-science and science-fiction books. Fascinatingly, the worlds are totally intertwined in Johnson, each feeding the other.

Looking into the night sky, he says, beckons big questions about our place and meaning. “To people who have not experienced the epiphany of a cloudless, no moon, starry night sky,” he muses, “I don’t know how to describe it. It’s a spiritual, emotional experience for me.”

For him, there is something similar to be found in well-written science fiction that draws the reader into wondering: “Are we alone in the universe?

What would it be like to visit these other places?” He says he gets the same “sense of awe and wonder of nature and the universe” from science fiction and physics. “And now, I get it in my day job. I’m very lucky.”

At NASA, Johnson is considered by some to be “on the edge” in terms of technologies because of his imagination and enthusiastic propensity to convince. “I want to push the envelope,” he says. And at sci-fi conventions—where he was welcomed as a teen fan and, later, as a post-Transy critical thinker with a keen ability to explain physics—he’s thought to be a tad corporate; he represents NASA’s scientific protocol of peer-reviewed science, rigor and due diligence. But he is highly successful and respected by both camps, with three prestigious Exceptional Achievement Medals from NASA, four space technology patents and multiple books of popular science and science fiction in publication.

Imagine gently propelling a craft through outer space using no rocket thrust, just a solar sail consisting of a large, thin sheet of film that reflects sunlight. After rocketing through the earth’s atmosphere, the mission relies on reflecting photons—light particles—to reach an asteroid and collect data.

Now picture convincing your superiors at NASA that this is a viable idea. Professionally, Johnson has been focused on solar sails for NASA since 1999. “But in my imagination,” he says, “it’s much earlier than that.”It’s the idea he convinced NASA to use, so the responsibility is his to make it work.

The solar sail that he first read about in 1970s science fiction is now the propulsion system for the Near-Earth Asteroid Scout mission that will be launched next year. Yes, it’s rocket science, but for Johnson, it’s also the interplay between hard science and the imagination that fuels his love of science fiction.

“This is the first flight of a solar sail that I have led and the first one that NASA or anyone in the United States has flown beyond Earth and into deep space,” he explains with equal measures of glee and sober realism.

“Nature is trying to stop you at every turn. So, when you propose to do something new, it’s very difficult to get that through the system because of the inherent risks—and expense—of doing something no one’s done before.” But he harped on the benefits of the new capability and successfully made his case.

According to the NASA website, 1,409 near-Earth asteroids(having orbits that pass nearby the Earth) pose a potential hazard to our world. We need to know more about them. But for Johnson, asteroids also present an opportunity.

As a native of Eastern Kentucky, he advocates the idea of mining asteroids to protect our planet. It’s why he co-wrote “Harvesting Space for a Greener Earth” and, more recently, a sci-fi novel. “Mission to Methone,” set in 2068, begins with an asteroid mining company looking at asteroids to mine; their survey vehicles are small aircraft propelled by solar sails. He thinks it will be common practice in 100 years.

Johnson writes “hard science” science fiction, meaning that the physics in his futuristic setting is physically possible. “My day job and education influence my writing in that I try to make the settings believable in science fiction. It’s hard to say where the distinction is because in my day job I get to dream up some pretty cool stuff. If it’s too cool for work, I take it to fiction,” he laughs.

The inspiration for “Mission to Methone” came during a series of weekly “risk management” meetings for the Near-Earth Asteroid Scout Mission. All of the experts gathered to brainstorm everything that could conceivably go wrong: “The rocket can fail. The communications antenna can fail. The power supply goes out. You get a cosmic ray that causes your computer to malfunction.There are a gazillion things that can go wrong,” he explains.

One day, several weeks into the relentless meetings, the person responsible for creating the flight plan from Earth to the asteroid introduced a less-than-one-percent chance that the asteroid could, in fact, be an old Saturn 5 rocket that had been captured in orbit around the sun.

“We all turned around and looked at him and chuckled,” Johnson recalls. But the idea, however fleeting, was enough to grab Johnson’s imagination. For a moment he zoned out and thought, “Wow, what if it is an old space ship and it’s not from Earth? What if it’s been there for 50,000 years?” He plotted the novel that night. “Mission to Methone” was published last February.

“So that’s how they interact,” he says. “People have their hobbies. I’m in my technical world at work. Literature and fiction are in a different part of the brain. For me, it’s cathartic. It’s recreational to write.” In the same month as “Mission to Methone,” he also published a nonfiction book, “Graphene: The Superstrong, Superthin, and Superversatile Material that Will Revolutionize the World.”

The many challenging dimensions of Johnson’s productivity relate directly to his liberal arts grounding: the unleashed imagination, the ability to integrate the many parts, the skill set and experiences that prepared him to communicate with a wide range of people and to convincingly make the case that is requisite to moving a project forward. He trumpets these connections, along with the ability to organize and manage projects of enormous scale.

In fact, he attributes so much to his Transy experience that he insists to every intern he works with at NASA who has chosen a strictly engineering education, that they spend summers taking humanities courses, creative writing and public speaking. “I guarantee you it will help you be better in your field,” he tells them. (His daughter recently graduated from Transy.)

Ultimately, he describes what he does as a moral obligation. “I see some real problems facing us as a world, with energy and the environment. I think things we’re doing in space can help solve some of those problems. And if we don’t start working on them now, then the solution gets postponed. We’d better start now.”

This article originally appeared in the spring/summer 2018 issue of Third & Broadway.