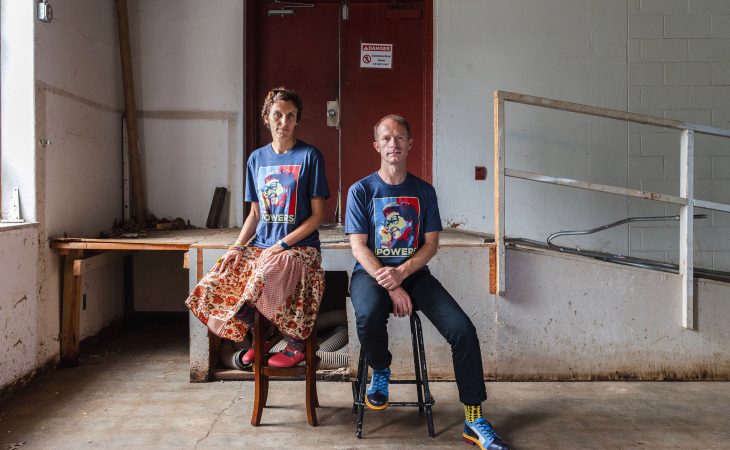 Sometimes art has the power to inspire civic action.

That is certainly the case with Transylvania Professors Kurt Gohde and Kremena Todorova’s Unlearn Fear + Hate project. In recognition of their achievement, the Kentucky Council for the Social Studies (KCSS) recently chose them for its inaugural Georgia Davis Powers Award.

Since 2016, Unlearn Fear + Hate has promoted community engagement and dialog. The wide-ranging public artwork has included the citywide installation of multilingual sculptural halos inscribed with the name of the project, which is from a Frank X Walker poem—as well as other art installations, photography and stenciling. Also, numerous school and community groups have participated, and Transylvania incorporated the theme into its curriculum for the 2016-17 school year.

“In part a visual petition to unlearn fear and prejudice, in part a commitment to treating others with compassion and justice, Unlearn Fear + Hate invites everyone to participate,” Todorova said.

The KCSS award is named after a Kentucky politician and activist who fought against racial discrimination alongside Martin Luther King Jr., Jesse Jackson and Jackie Robinson.

The Transylvania professors’ efforts reflect the spirit of Powers’ service, according to KCSS, which created the award to “recognize educators who weave taking informed civic action into their personal and professional lives, particularly towards empowering young people to do the same.”

Todorova said, “We feel truly humbled to have been recognized with an award named after Georgia Davis Powers. It’s hard to imagine what it was like for her to enter the Kentucky Senate as the first person of color and the first woman elected to it, back in 1967.”

Powers introduced legislation to remove race from driver’s licenses and supported open housing; and she later founded the Friends of Nursing Home Residents and Quality Education for All Students, which monitored schools to prevent re-segregation, according to KCSS.

Professor Gohde said Powers “fought for the rights of African Americans, women, people experiencing poverty, people thought to have disabilities and the disenfranchised. So this award is also a reminder to try to do what is right and to do it well. It comes with a lot of responsibility.”

This is one of may recognitions for the artistic duo. Others include the Lexington Forum Spirit Award for creating meaningful change and volunteerism; a Festival Latino Award; and, for their Lexington Tattoo Project, inclusion in the Public Art Network Year In Review, 2014, by Americans for the Arts. Also, Mayor Jim Gray named them Henry Clay Ambassadors in 2012.