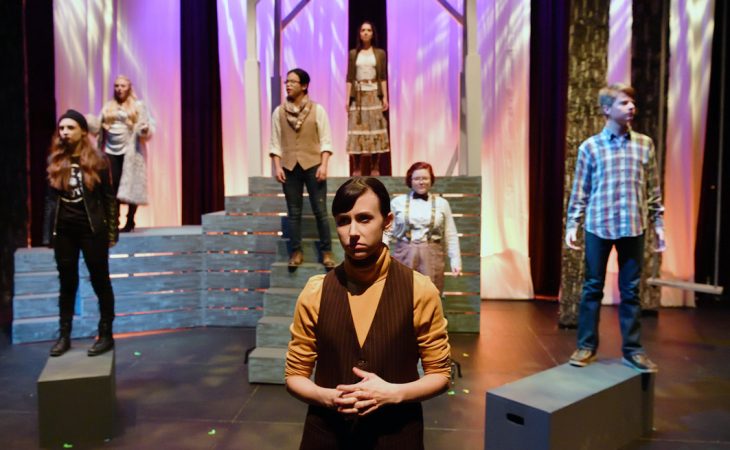 One of my favorite theater moments happened on the Sunday before opening this show. We had been in the theater for six hours and still had another six hours to go (technical week is a beast). I’ll repeat that, we (meaning seven actors, four designers, four production crew and one director) had been in a “black box” for six hours, with the next six hours looming in front of us. And the end of the play was not working. We tried to execute it as written in the stage directions, but it was lackluster. We tried to add additional dramatic technical elements, but they came off ridiculous instead of sincere. We tried to reshape the psychological through-line of our protagonist, but it was not dynamically translating from brain to stage. What to do? The show opens in four days!

I turned to our entire team- designers, cast, crew; veterans of the theater as well as those who have never worked on a play before (yes, we have a few of those!). I walked out what I thought I wanted. I talked out what I was getting, which was not what I wanted. I emoted what I hoped the audience wanted… or needed (dramatic tension, catharsis, resolution ((or not)) and all the rest). And then one of our first-year actors said, “What if…” and made a brilliant suggestion that you will see as the end of this production. Two words, “What If,” followed by a possibility. Perhaps a solution, perhaps a mistake, but always a choice, a risk, a vision.

Stupid F***ing Bird runs Nov. 1-10. Tickets are free, but must be reserved in advance. Visit transy.edu/theater or call 859-233-8514 for more information or to reserve tickets or to get more details on Transylvania Theater’s 2018-19 season, a part of the university’s New Frontiers series.