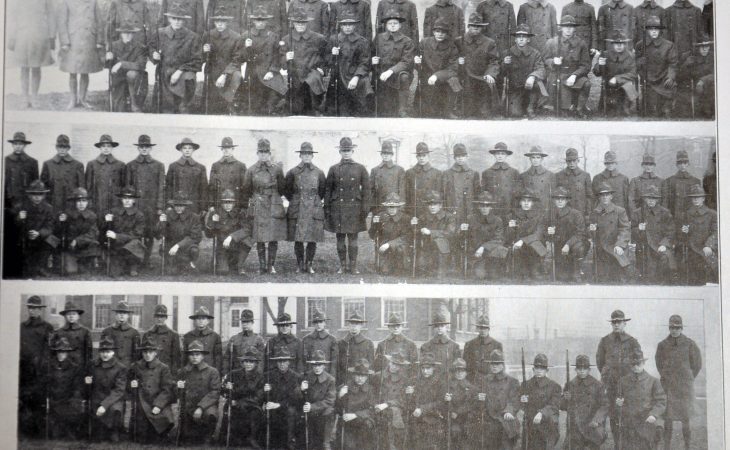 Transylvania students answered the call to duty during World War I

Twenty-four days after the United States entered World War I in April 1917, Robert McLachlan, class of 1919 and a native of Dry Ridge in Grant County, enlisted in the U.S Army. He was one of 27 students who left the classrooms of Transylvania for the battlefields of Europe.

McLachlan served as a corporal in Company F of the 16th Infantry Division. After enlisting at Fort Thomas, Kentucky, he “left the United States June 6th as Pershing’s Standard Bearer,” according to the Crimson yearbook from 1919.

He never returned to the U.S., to Kentucky or Transylvania.

Robert McLachlan was killed in action July 19, 1918. He is memorialized at Aisne-Marne American Cemetery‘s Tablets of the Missing in Belleau, France. On this Veterans Day 2018, 100 years after the armistice that ended World War I, we honor his service.

As the world looks back this Veterans Day on the centennial of the Nov. 11 armistice, we reflect on the service of those called to duty. The 1919 Crimson yearbook details those Pioneers who served:

While 32 students left Transy to join the war efforts, the Student Army Training Corps was organized on campus “for the purpose of supplying the American Army with educated and trained men for officers,” the Crimson staff wrote. On October 1, 1918, 85 students were voluntarily inducted into service. One of the campus buildings, Ewing Hall, was converted into an Army barracks.

Even an unfortunate breakout of the flu, which closed the college, provided an opportunity for the corps. “Hikes, drill, inspections, signaling, athletic pastimes, bayonet work and fatigue duty took up most of the day.” When uniforms and rifles for the corps members were delayed, they took time to organize a band, “and the Star Spangled Banner was played every afternoon at retreat.” According to one report, the Transylvania group was the “best drilled unit” in a three-state territory.

Less than six weeks after the unit stood up, the armistice was signed. By Dec. 20, 1918, Transylvania’s Student Army Training Corps was demobilized and students returned to their studies.

The Crimson editorial staff in 1919 described how it was impossible to ascertain the names of all of the sons – and now daughters – of Transylvania who have war records, “but in every conflict since 1780, the year the Virginia Legislature passed an act to establish a seminary in Kentucky … a great number of [those] connected with the institution … have contributed largely to freedom’s cause.”

On Veterans Day 2018, we honor those from our university community and beyond who have for generations answered the call to serve.