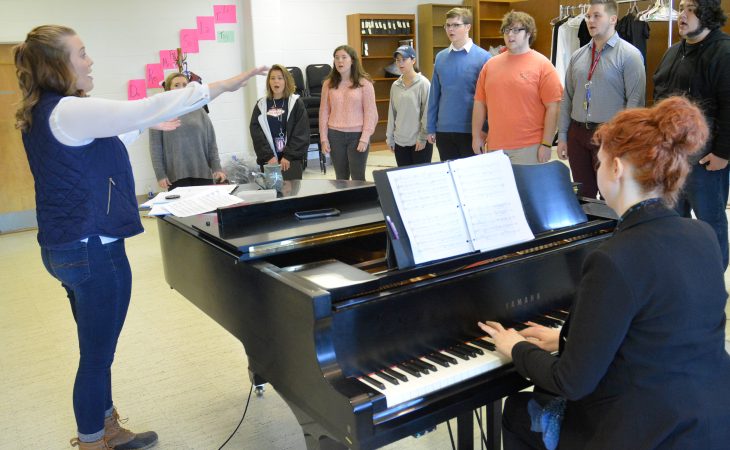 With a name like Battle on Broadway, you’d expect a clash of fierce rivals when Transylvania tips off against the University of Kentucky on Friday in Rupp Arena.

Transy is no Duke in the eyes of UK, though. And there are a lot of Wildcat fans at Transy. Underscoring the friendly nature of this exhibition game, the Transylvania University Choir will stand side by side with the UK Blue Note a cappella group—each wearing their own school colors—to sing the national anthem.

“We’re going to stand mixed as one choir, so it will look like two groups have come together,” said Blue Note vocal coach Holly Bennett. “We’re all very excited.”

At the center of this crimson and blue blend is Regan MacNay, Transy’s new assistant professor of music and director of choral activities. She recently earned her doctorate from UK, and her name came up when Transylvania President Seamus Carey was having dinner with UK Director of Opera Everett McCorvey, MacNay said. That conversation led to Friday night’s collaboration.

“It’s such a blessing to have Dr. MacNay here,” Bennett said. “To come straight from UK, it opens up so many new doors of communication. That’s really exciting for the future.”

Bennett on Wednesday visited Transylvania for a rehearsal and to tell them what to expect at Rupp.

MacNay described the students’ reaction when she first told them they’d be singing at center court in that storied arena: “My choir just levitated out of their seats, they were so excited to do this.”

They’ll sing an a cappella version of the “Star-Spangled Banner” in a jazz style. “It’s a challenging piece,” MacNay said. “It’s really cool. It’s going to bring Rupp to its feet.”

That’s a pretty impressive accomplishment for a group who, other than two singers on the cheer and dance team, aren’t necessarily athletes.

Transylvania senior Michael Maggard, who once sang with a statewide choral group at a Wildcat football game, is looking forward to Friday’s performance. “It’s pretty exciting,” he said. “You get to see them on TV, but to actually be there on the floor and to get to perform in front of such a large crowd is such an awesome opportunity.”

Senior Rachel Stone feels the same way. “It’ll be really cool to be in Rupp Arena,” she said. “I know a lot of people from Transy are planning on going, so hopefully our student section will be really full, and it’ll be exciting to be cheering on our team.”

Plus, Stone appreciates getting to work with Blue Note. “We’ve never actually been able to sing with UK,” she said. “We get to do a lot of stuff together with them academically—whether it’s labs, the library, that kind of stuff—I think it’s cool that we’re going to be doing this together.”