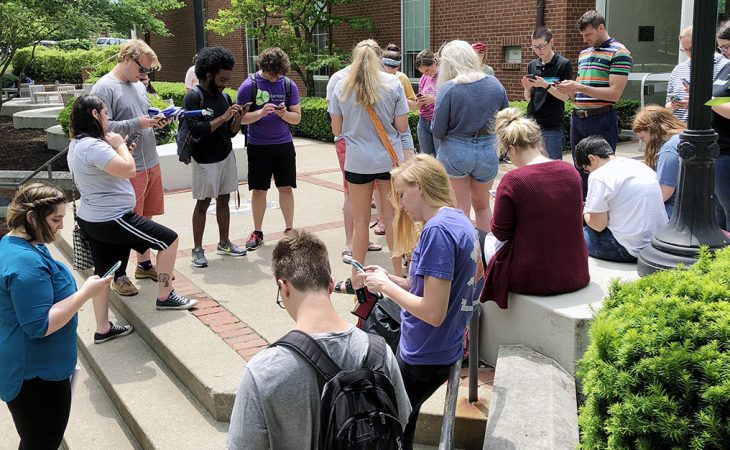 You’ve probably seen us on campus. Groups of people near the Glenn Building on Old Morrison lawn, hovered around the Kissing Tree, or at the entrance to the library, all staring at their phones, methodically tapping the screen. Sometimes we spill over into Gratz Park, standing on the other side of Third Street, facing campus, with people from the larger Lexington community. You may have wondered what we’re doing.

Pokémon Go is an augmented reality game played on smartphones and tablets that uses GPS technology. People who play the game are called “trainers,” and we all have trainer names and avatars that represent us. Primary goals in the game are to catch creatures (i.e., pokémon), battle in gyms to support your team members and kick out pokémon from other teams, collect helpful items at pokéstops, conduct field research, and earn special pokémon by doing raids at the gyms.

GPS mapping creates a version of the real world in the game, such that aspects of the game are incorporated into what looks sort of like Google Maps. For Transy’s trainers, we see two versions of campus: the physical version as it exists in the “real” world, and the version in the game that has gyms, pokéstops, and pokémon all over the place.

When Pokémon Go first started, Transy was proud to host a gym and several pokéstops and students, faculty, and staff got into the game. Interest soon died out, however, both generally and at Transy. The company who owns the game, Niantic, then made a number of changes: the Kissing Tree became a gym, new pokémon were added, trainers can have friends in the game, and raids are more interesting. Currently, interest in the game is perhaps at an all time high.

Transy is now home to two gyms and nine pokéstops. One of the gyms on campus is a special gym, one of about 20 in Lexington, that, if engaged with often enough and with enough people, can give certain players unique access to a rare bonus Pokémon.

Senior Ally Benz started the Transy’s Trainers GroupMe that currently has more than 50 members and, as noted by several students, is likely one of the most active groups on campus. Membership is made up of students, faculty, and staff who play the game, and new people are added to the group regularly.

The GroupMe has allowed us to communicate with each other about events in the game (e.g., raids) and helps us coordinate meeting to participate in the events. We also share game information, such as the locations of rare pokémon that are on or near campus.

Key aspects of playing Pokémon Go require trainers to engage with others; playing alone won’t yield a number of important benefits. Due to this, Transy’s Trainers has become a community that has students from a wide variety of organizations, different backgrounds, different majors, introverts and extroverts.

In addition, our group plays with members of the larger Lexington community who regularly show up for events at the gyms on campus. These meetups are often coordinated by relaying information through various other chat programs (e.g., Facebook Messenger and Discord), with community members willing to wait for students to get out of class, and students willing to wait for people to drive across town to get to Transy. In this way, the game has helped to create an informal partnership between Transy’s Trainers and trainers in the surrounding areas.

Within Pokémon Go, there are three possible teams to join when you sign up for the game, and these teams are at least theoretically competing with one another, which is another way to get more points and move ahead. At Transy, however, and this is somewhat true of the greater Lexington community, even though we belong to different teams, we often play together, even going so far as to help rival team members. We have what we like to call a friendly ecosystem of Pokémon players in place.

We’d love to have you join us!

About the authors: Carole Barnsley is an associate professor of religion. Avery Tompkins is a Diversity Scholar. Both are active “trainers” with Transy’s Pokémon Go group.