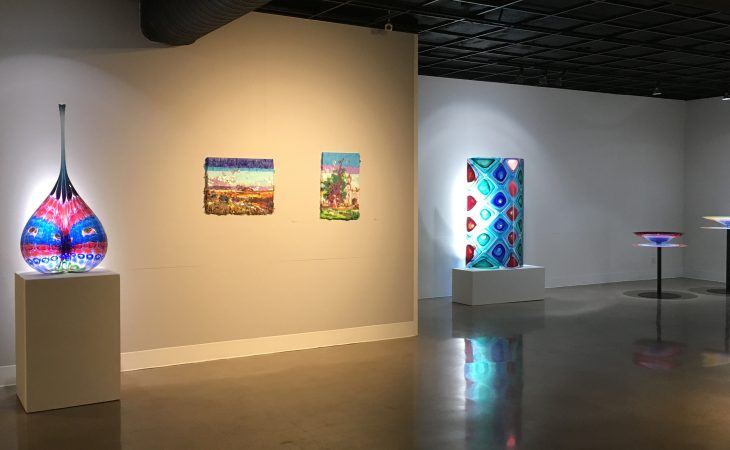 Transylvania University’s Morlan Gallery recently launched an exhibition that explores—and complicates—the notion of “pretty” with works in a variety of media that range from the beautiful to the grotesque.

Curated by Emily Elizabeth Goodman, a Transylvania assistant professor of art history, “Something Pretty” features five prominent U.S. artists. Their works—which engage with the aesthetics of prettiness, yet undercut the dismissive connotations of the label—include glowing glass sculptures by Stephen Rolfe Powell, a documentary-style video by HuiMeng Wang and landscapes “painted” in piñata paper by Joseph Favela. Also, artists Angela Dufresne and Tiffany Calvert challenge their own practice of painting by glitching, subverting and deconstructing the still life and the female form to confound notions of beauty as represented in the long history of mark making.

A 10-page exhibition catalog is available with “Something Pretty,” which will run through Dec. 4. Email Morlan Gallery Director Andrea Fisher for a copy.

The free show is part of Transylvania’s New Frontiers feature event series, which asks the public to go beyond the familiar and explore ideas, art and music.

All events are free and open to the public and in the gallery on the main floor of the Mitchell Fine Arts Center. Regular hours are noon to 5 p.m. weekdays. For more information, contact Fisher at 859-233-8142 or go online to get more details about this season’s exhibitions and programming.

Emily Elizabeth Goodman, is an art historian, curator, critic and assistant professor of art history at Transylvania. She received her B.A. from McGill University and her M.A. and Ph.D. from the University of California, San Diego. Her research focuses on critical examinations of gender in the work of contemporary women artists in the United States, with a particular emphasis on the use of food in feminist art practices. Her writing has appeared in the journal Performance Research, Number Magazine and on Hyperallergic.com and Under-Main.com.

Tiffany Calvert’s work has been shown nationally and internationally, including in the Lawrimore Project in Seattle, E.TAY Gallery in New York, Carl & Sloan Contemporary in Portland, Oregon, and Cadogan Contemporary Gallery in London. She has received a Geraldine R. Dodge Fellowship, Great Meadows Foundation Grant and residencies at the Art Omi International Arts Center and Djerassi Resident Artists Program. In 2010, she was awarded a Pollock-Krasner Foundation Grant. Calvert’s current studio research investigates the relationship of digital media to the reception and perception of images. She is assistant professor of art at the Hite Art Institute at the University of Louisville and artist-in-residence at the Speed Art Museum for 2018-19. Some works in this exhibition were made possible by grants from the Olorunsola Endowed Research Award for Young Scholars at the University of Louisville.

Angela Dufresne, who is originally from Connecticut, was raised in the suburbs of Olathe, Kansas, the location of the horrific murder of the Clutter family, written about in Truman Capote’s “In Cold Blood.” Her work articulates non-paranoid, porous ways of being in a world fraught by fear, power and possession. Through painting, drawing and performative works, she wields heterotopic narratives that are both nonhierarchical and perverse. Dufresne has exhibited in many venues, including the Hammer Museum in Los Angeles, the Cleveland Institute of Art and the Minneapolis College of Art and Design. She is an associate professor of painting at the Rhode Island School of Design. Awards and honors include a 2016 Guggenheim Fellowship, a residency at Yaddo, a Purchase Award at The National Academy of Arts and Letters, fellowships at the Fine Arts Work Center in Provincetown (Massachusetts) and Center for the Arts in Sausalito, California, and a Jerome Foundation Fellowship. She is based in Brooklyn, New York.

Justin Favela is a Las Vegas native working in the mediums of painting, sculpture and performance. His work draws from art history, popular culture and his Guatemalan/Mexican heritage. He has participated in exhibitions and has been awarded artists residencies across the United States, Mexico and the United Kingdom. Favela recently exhibited his work in “Unsettled” at the Nevada Museum of Art in Reno and in “Mi Tierra: Contemporary Artists Explore Place” at the Denver Art Museum, which featured site-specific installations by 13 Latino artists that expressed experiences of contemporary life in the American West. Favela was also part of the group exhibition, “Shonky: The Aesthetics of Awkwardness,” which toured the United Kingdom. Favela has curated a variety of southern Nevada shows in diverse spaces, including the Marjorie Barrick Museum of Art at the University of Nevada, Las Vegas, and the El Porvenir Mini-Market in North Las Vegas. He is the 2018 recipient of the Alan Turing LGTBIQ Award for International Artist.

Stephen Rolfe Powell is an internationally recognized glass artist whose elaborately colored vessels are in permanent collections throughout the world. His work has been featured on CBS’s “Sunday Morning” and Kentucky Educational Television, as well as on the covers of American Craft, American Style and Glass Art magazines. Kentucky Monthly named him one of the state’s top 20 artists of the 20th century. Powell was one of eight Americans chosen for Venezia Aperto Vetro, 1998, a prestigious glass exhibition in Venice, Italy. He has been a guest teacher and artist around the country, including at the 2002 Winter Olympics in Salt Lake City, Utah, and the renowned Pilchuck Glass School in Washington. He also teaches around world. Living in Danville, Kentucky, Powell has been an art professor at Centre College since 1983. He received his B.A. in painting and ceramics from Centre and an M.F.A. from Louisiana State University.

HuiMeng Wang, who was born and raised in Inner Mongolia of China, received her bachelor’s degree in biomedical engineering from Beijing University of Aeronautics and Astronautics in 2012. In 2014, Wang started attending San Francisco Art Institute, where she received her M.F.A. in studio art. A diverse educational and cultural background has made her immensely conscious about the changes and formation of personal identities during a socio-geographical, professional and cultural transition. Wang’s work has been exhibited in galleries and cultural centers including Embark Gallery, Fort Mason Center for Arts & Culture, SOMArts Cultural Center and APAture Arts Festival. She has held residencies at Otis College of Art and Design, Kimmel Harding Nelson Center for the Arts, ACRE and The Millay Colony for the Arts. She lives and works in San Francisco.