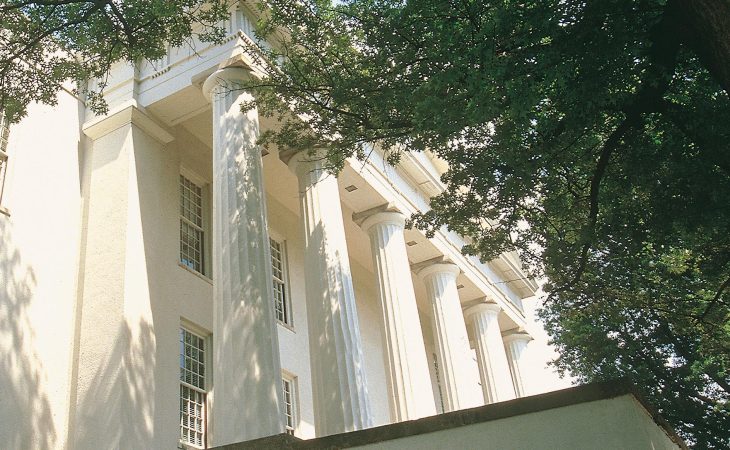 A message to the Transylvania community

This past weekend we welcomed families to campus to share in Family Weekend. Throughout those days, our students displayed the character that makes us all proud to be a part of this community. Friday night before the men’s basketball team squared off against the University of Kentucky at Rupp Arena, our choir stood side by side with singers from UK to sing the National Anthem.  Our men’s team then competed with class and dignity against the second ranked team in the nation.  The next day our women’s volleyball team won the conference for the first time in our history. Before celebrating, they lined up to shake hands with their opponents. At the President’s Brunch, we witnessed loving and concerned parents checking in with their sons and daughters to see how they have adjusted during the first half of the semester.

We often invoke our school’s motto when referring to the distinctiveness of our community– In Lumine Illo Tradimus Lumen. We can only pass on the light, however, if we keep it burning. This past weekend, we witnessed the fuel that sustains the light of Transylvania in the dignity, courtesy, and respect that our students extended to their families, friends and opponents.  These are the virtues that foster a vibrant community and establish the conditions for learning to take hold.

Sadly, at the same time the strengths of our community were on display, darkness spread across our country.  While our families enjoyed brunch, our Jewish neighbors in Pittsburgh were being shot to death in their synagogue. Earlier in the week and closer to home two African-American neighbors were mowed down at a Louisville Kroger. Between these two events, several prominent citizens were targeted with mail bombs.  The contrast between the light of our learning community and the darkness of this political hatred could not be more pronounced.

In the second half of the last century, Jewish philosopher Emmanuel Levinas offered a diagnosis of the underlying causes of this kind of darkness. He elucidated a fundamental difference in seeing each other through the restrictive lens of our insecure egos and welcoming the other as an expression of the infinite. He described the former way of seeing the other as totalizing, a means of reducing the other to a preconceived idea of who we want them to be. We try to fit the other into a box that we create regardless of who he really is. For Levinas, this way of seeing the other is, in itself, already violent.

In contrast, Levinas sees the face of the other as the trace of the infinite.  If we are paying attention, if we care to really look, we recognize that we can never adequately define, know, or understand the other. The reality of each person overflows our ability to adequately comprehend. If we are open to the infinite reality of the other, our primary relationship becomes one of welcoming, care and hospitality.

These are the qualities upon which thriving communities are built. So even when our points of view diverge, our words conflict, our displays offend, we know that there is more to the other than is revealed. As a community of learners and inquirers, we engage in discourse to uncover the excess of the other. We welcome the deeper dimensions of their humanity through civil discourse and attentive listening.  At our best, we welcome the expression of the other regardless of their race, ethnicity, gender, politics, or religion.  Beyond all of these labels each individual is an expression of the infinite.

An essential component of a liberal education is to cultivate perceptual skills to see the depth of what is not immediately revealed and the virtue to welcome it. This cultivation is how we continue to pass on the light and resist the darkness that threatens our democracy.