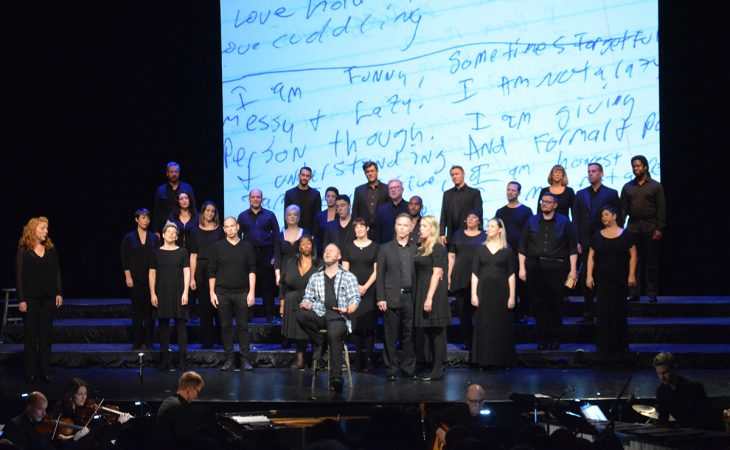 Twenty years ago this week, a Wyoming college student was brutally beaten and left to die. His death inspired state and national efforts to pass hate crime legislation and numerous documentaries, plays and musical works. One of those tributes, “Considering Matthew Shepard,” brought its national tour to Transylvania on Tuesday, Oct. 9.

The choral and instrumental masterpiece tells Shepard’s story through an emotional, yet inspiring journey of song and simple, evocative staging.

“I wanted to bring memories, so that we wouldn’t forget Mathew Shepard and his story and that we would remember the lessons that we have learned from his life and his death,” composer Craig Hella Johnson shared during a recent interview on WEKU’s Eastern Standard.

Prior to the performance, Transylvania hosted a resource fair that drew participants from nearly 20 community organizations.

Rachel Halliday ’18 attended with Pride Community Services Organization, whose mission is to provide support to the LGBTQ community both in Lexington and the greater Bluegrass area.

“Diversity promotes an overall well-being within a community,” Smith said. “These events do a really great job of promoting that and helping other cities and areas and towns around Lexington to see that Lexington is thriving because we are reaching out to communities like the LGBTQ community.”

Fortunate Families, a Catholic ministry organization based at St. Paul’s near Transy, was among the groups who met with resource fair attendees.

“We want to make sure that everyone, no matter what walk of life they’re in, and especially young people who are in universities right now, understand that our doors are open,” said Lesley Farmer, a member of Fortunate Families. “We love them, we want to celebrate with them, we want to pray with them. We just hope that they feel as welcome as we want them to feel.”

Reaching out across campuses, representatives from the University of Kentucky’s institutional inclusion community engagement team also participated in the fair and attended the performance.

“The city of Lexington and the University of Kentucky both recognize the real significance of the step that Transy has taken to show an incredibly beautiful life, but sad death of Matthew Shepard, a milestone for both hate crime legislation and LGBTQ growth and strengthening as a community,” said Lance Poston, director of UK’s Office of LGBTQ* Resources. “To be able to tell that story in a place like Lexington, that is 20 years later still relevant is, I think, a wonderful move by Transy and something that makes me proud as both a representative of the university and a representative of the city.”

Kenny Bishop, deputy director of communications for the City of Lexington, said: “As the city’s LGBTQ liaison in the mayor’s office, it means a lot to us and it means a lot to the LGBTQ community. And to be able to always remember Matthew Shepard and what happened there and bring that home is very important and very significant and we’re grateful that Transy is doing that for us.”