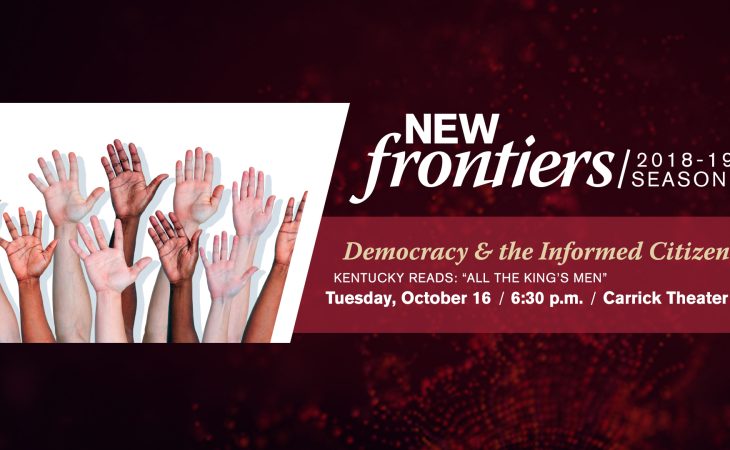 Idealism vs. pragmatism is a central theme in Robert Penn Warren’s “All the King’s Men.” According to Transylvania’s associate dean of academic affairs, the story — first published during World War II — remains timely.

“The novel remains relevant not because of the current state of American politics, but because it ingeniously weaves the story of humanity and human nature throughout its pages,” said Michael Cairo. “It offers lessons not only about politics, morality, journalism and citizen engagement in democracy, but also about what it means to be human.”

In a recent interview on the Think Humanities podcast, Cairo, who also teaches political science at Transylvania, discussed with host Bill Goodman the relevance of “All the King’s Men,” and the tension between idealism and pragmatism, in relation to today’s society.

“Idealism is problematic. There have been so many great leaders that when you delve in too deeply past their greatness, they’re not so great anymore,” he said.

Cairo will serve as a moderator for a community discussion on the importance of journalism in maintaining democracy and an informed citizenry during an upcoming Kentucky Reads event. Democracy and the Informed Citizen, will be held in the Carrick Theater on Tuesday, Oct. 16, at 6:30 p.m.

The evening will begin with a reading of excerpts from the play “All the King’s Men” featuring regional actors and will be followed by a panel discussion including Mayor Jim Gray, journalist Linda Blackford and Transylvania professor Maurice Manning.

This event is is part of Transylvania’s New Frontiers season, which asks audiences to go beyond the familiar and explore ideas, art and music. The 2018-19 season focuses on Transylvania’s yearlong campus theme—civility—and the debate over its role in shaping citizens and communities.

Democracy and the Informed Citizen is administered by the Federation of State Humanities Councils through a partnership with The Pulitzer Prizes and support of the Andrew W. Mellon Foundation. The event is also sponsored by Transylvania and the National Endowment for the Humanities and is the fourth in a series of five community discussions on the importance of journalism in maintaining democracy.

Listen to the Think Humanities podcast, produced by Kentucky Humanities, below.