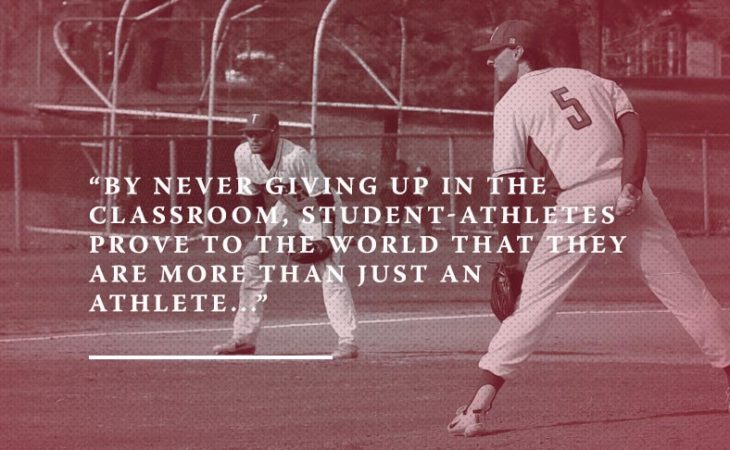 Across the country, more than 460,000 young women and men compete on an NCAA collegiate level athletics team. The vast majority of these student-athletes will “go pro” in something other than sports.

At Transylvania University, student-athletes are just as focused on academics as they are on athletics. They let their success in the classroom speak for itself.

Cooper Theobald plays on the Pioneers men’s basketball team. “On the court I am considered a hard nosed, tenacious, and motivated player,” Theobald, a senior business major, said.  “I am so much more than just an athlete. I pride myself on working hard in the classroom and I have a 3.6 GPA. Being a student-athlete requires more than just playing; student always comes first.”

“Student-athletes are the epitome of tenacity and hard work,” said Colton Hartig, a sophomore biology major on Transy’s baseball team. “Not only do athletes have to prioritize their responsibilities on the playing field, but also their responsibilities in the classroom. By never giving up in the classroom, student athletes prove to the world that they are more than just an athlete, they are intellectuals who exhibit hard work in every part of their lives.”

“We are student-athletes. But, we are also much more than that. We excel on and off the court, in the classroom, and in the pool,” explained swimmer Sarah Haerle, a junior biology/pre-dentistry major. “We are future teachers, dentists, lawyers, and engineers. We are hard-working, dedicated and scholarly. Most importantly we are teammates.”

“We are student-athletes. But, we are also much more than that. We excel on and off the court, in the classroom, and in the pool,” explained swimmer Sarah Haerle, a junior biology/pre-dentistry major. “We are future teachers, dentists, lawyers, and engineers. We are hard-working, dedicated and scholarly. Most importantly we are teammates.”

Annebelle Klein is a junior and plays on the field hockey team. “My future holds more than just the sport I play,” she said. “Being a student athlete at Transy has not only given me the opportunity to continue playing the sport that I love, but the ability to focus and excel in my studies and preparation for law school. Though the time left with my sport is limited, the effects of being a student athlete here at Transy are everlasting.”

From Oct. 1-5,  Transy’s student-athletes and coaches are lending their voices to the NCAA’s diversity and inclusion outreach efforts. The national effort includes not only student-athletes from a wide variety of sports, but also all divisions and NCAA member institutions. Join the discussion online using #NCAAInclusion and follow @Transy on Twitter or @transylvaniauniversity on Instagram to meet our participating athletes.