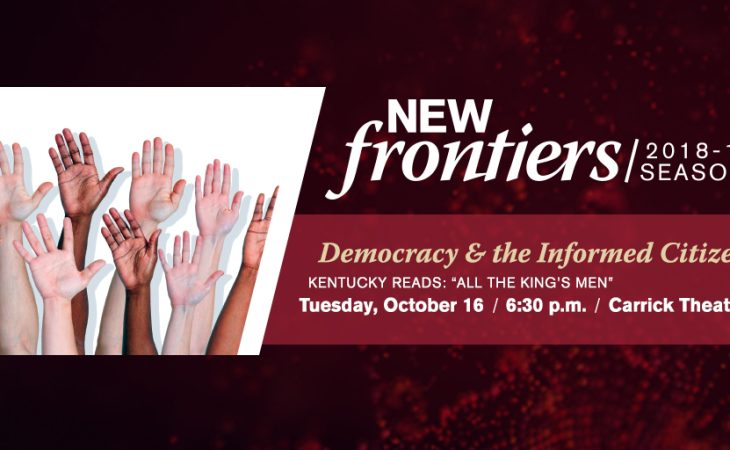 Transylvania University on Tuesday, Oct. 16, will host Democracy and the Informed Citizen—a community discussion presented by Kentucky Humanities about the importance of journalism in maintaining democracy and an informed citizenry.

Panelists will include Lexington Mayor Jim Gray; Linda Blackford, a reporter for the Lexington Herald-Leader; and Maurice Manning, professor of English and writer-in-residence at Transylvania. The moderator will be Michael Cairo, Transylvania’s associate dean for academic affairs and professor of political science.

The free, public event will be at 6:30 p.m. in Carrick Theater. It will feature a reading by local actors of a stage adaptation from Robert Penn Warren’s “All the King’s Men.” The classic novel will serve as a starting point to engage the audience in a discussion.

“‘All the King’s Men’ provides a window into power and its impact on the human psyche,” Cairo said. “More than just a novel about politics, Robert Penn Warren gives us insight into humanity and the human condition. The novel remains relevant not because of the current state of American politics, but because it ingeniously weaves the story of humanity and human nature throughout its pages. It offers lessons not only about politics, morality, journalism and citizen engagement in democracy, but also about what it means to be human.”

Democracy and the Informed Citizen is part of Kentucky Humanities’ Kentucky Reads: “All the King’s Men,” an initiative to guide a statewide conversation on contemporary populism and political discourse—and their relationship to journalism.

“From the earliest days of our country, citizens have relied on a free press to stay aware and informed,” said Bill Goodman, executive director of Kentucky Humanities. “Though the media has changed drastically over two centuries, the need has not. From the smallest rural newspaper to the largest cable news network, journalism is one of the keys to an engaged and informed populace. These discussions will be a great reminder of the influence journalism has on our communities and nation.”

Democracy and the Informed Citizen is administered by the Federation of State Humanities Councils through a partnership with The Pulitzer Prizes and support of the Andrew W. Mellon Foundation. Next month’s discussion is also sponsored by Transylvania and the National Endowment for the Humanities and is the fourth in a series of five community discussions on the importance of journalism in maintaining democracy.

This event is is part of Transylvania’s New Frontiers season, which asks audiences to go beyond the familiar and explore ideas, art and music. The 2018-19 season focuses on Transylvania’s year-long campus theme—civility—and the debate over its role in shaping citizens and communities.

For more information about Kentucky Reads: “All the King’s Men” and activities taking place throughout the state, visit kyhumanities.org.