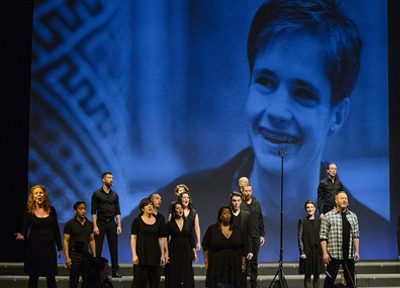 Transylvania University and the Dorothy J. and Fred K. Smith Concert Series will present Grammy award-winning Conspirare in a performance of “Considering Matthew Shepard” on Tuesday, Oct. 9, at 7:30 p.m. in Haggin Auditorium (Mitchell Fine Arts Center). This evocative choral drama, composed by Craig Hella Johnson, is a mix of musical textures and idioms that defy genre and come together to create a sense of hope, compassion, unity and empowerment.

The national tour comes to Lexington nearly 20 years to the day when Matthew Shepard’s life was taken in an anti-gay hate crime. The choral and instrumental masterpiece tells Shepard’s story and reverberates with larger questions. “Matt’s story is not unique,” his mother, Judy Shepard, reminds us. “It’s a universal story.”

Craig Hella Johnson uses a wide range of poetic texts that span centuries and include contemporary writers Lesléa Newman and Michael Dennis Browne, in addition to works of Hildegard of Bingen, Rumi and Hafiz. Passages from Matthew Shepard’s personal journal, interviews and writings from his parents, Judy and Dennis Shepard, as well as newspaper reports add to texts by Johnson and Browne.

The power in the work, as described by The Washington Post, “demonstrates music’s capacity to encompass, transform and transcend tragedy. Powerfully cathartic, it leads us from horror and grief to a higher understanding of the human condition, enabling us to endure.”

“Considering Matthew Shepard” is presented as part of Transylvania’s New Frontiers series, which explores new ideas and perspectives through the arts, humanities and sciences. It also represents the university’s year-long exploration of “civility” as a campus theme. The public is invited to campus to share in these experiences—including free admission and parking.  Tickets are required and are available at transy.edu/events.

A resource fair featuring community organizations will take place at 6:30 p.m., one hour prior to the 7:30 p.m. performance. The composer will take part in a discussion immediately following the concert.