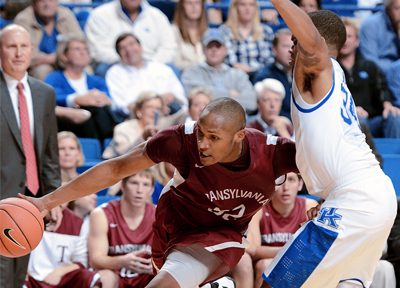 LEXINGTON, Ky. – The Transylvania University men’s basketball team will tip off its 2018-19 campaign against the University of Kentucky at Rupp Arena on Friday, Oct. 26, in a preseason contest.

This matchup between the NCAA Division III and Division I neighbors rekindles the crosstown “Battle on Broadway” rivalry for the first time since the 2013-14 season. Rupp Arena is just four blocks down Broadway from Transylvania’s campus.

The exhibition game between the Pioneers and Wildcats marks the fourth meeting between the two squads during the 18-year tenure of Transylvania men’s basketball head coach Brian Lane. Transylvania and Kentucky are 7-7 against each other in the regular season dating back to 1903, although Kentucky has won all three of the preseason games.

“It was a thrill for our fans, students and alumni to experience all the events surrounding the earlier matchups with UK, and I know this group of student-athletes will share in that excitement,” Lane said. “Coach Calipari’s generosity to the local community never ceases to amaze me, and I appreciate him allowing us to share in the national spotlight in such a historic venue.”

This year’s game will also honor the late C.M. Newton, who passed away in June at age 88. A patriarch of the Transylvania men’s basketball program, Newton coached the Pioneers over three stints for 12 seasons and later went on to become athletics director at UK from 1989-2000, guiding Kentucky through one of the most robust eras in school history.

An inaugural inductee into the Transylvania Athletics Hall of Fame, Newton played basketball and baseball at Kentucky and was drafted by the New York Yankees. Following his professional baseball career, Newton returned to Lexington to begin his coaching career at Transylvania in 1951, guiding the men’s basketball team. Newton later went on to head coaching assignments at the University of Alabama and Vanderbilt University before taking the reins as AD at Kentucky.

“I love that we will be recognizing Coach Newton and all of his significant contributions to both Transylvania and the University of Kentucky with this game,” Lane added. “He always spoke about his years at Transy as being a truly special time in the lives of his family. We are extremely proud that he started his Hall of Fame career as a Pioneer.”

Transylvania faces a Kentucky team coming off a 26-11 season in which the Wildcats won the Southeastern Conference tournament championship and advanced to the Sweet 16 round of the NCAA Tournament. Kentucky is coached by John Calipari, who enters his 10th season as head coach. The Naismith Memorial Hall of Famer led the Wildcats to the 2012 NCAA National Championship.

The Pioneers and Wildcats last played in an exhibition on Nov. 1, 2013, with the Wildcats prevailing 76-42.

A tip-off time and television carrier for the exhibition will be announced later.