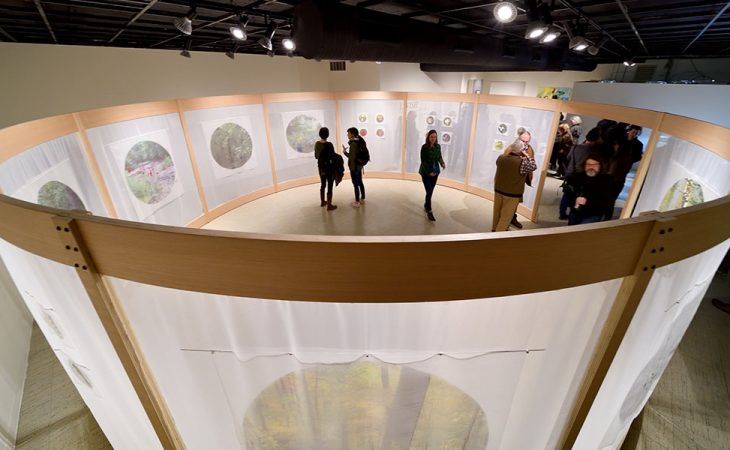 While admiring the view atop Pine Mountain in southeastern Kentucky, you might not notice the reindeer lichen growing at your feet.

Even if you happen to glance down at this pillowy plant, odds are you’ll overlook how it curls at the edges, or how it has four shades of green but appears almost silver.

You’d get to know the lichen’s subtleties, though, if you were to sit down for hours at a time to embroider on a photograph of it printed onto silk. This kind of focus fosters a sense of connection—one that shows us how stitching a humble lichen can help us address big problems.

In this case the problem is: How can we protect and heighten interest in wild places? Other approaches might have you sit through an eye-glazing lecture about the importance of biodiversity, or learn a fact about the amount of carbon absorbed by a certain acreage of forest. While both are well and good, Transylvania art professor Zoé Strecker takes a different approach; she and her collaborators make art that benefits both natural and human communities—from the coal fields of Kentucky to hurricane-ravaged Puerto Rico.

A project of hers called “Lavish!” takes on abstract, challenging economic and social issues through creative work. Transylvania’s Morlan Gallery this past spring featured the embroidery exhibit, which is based on organisms living on Pine Mountain, actually a 125-mile ridge running through the heart of Appalachia. Volunteer embroiderers from across the country stitched vignettes from Strecker’s photos, and she hung them within a circular, wooden structure that measured 22 feet across and 10 feet high. To experience the exhibit, visitors stood encircled by the images while sounds of Strecker’s field recordings and mists that smelled like trees—and even dirt—further immersed them in the scene.

“I’ve just decided to create work that gives people a little window into the different types of natural communities,” she says.

Strecker didn’t start out to solve any problem. Instead, the artwork grew out of her feelings for Pine Mountain. “I just love the place so much and I love the wildness. It’s the closest thing to a truly wild place that I’m around very much.”

She created these “little windows” not only for the gallery visitors but also the embroiderers, whose “lavish” energy and attention on lichen and other Pine Mountain denizens gave the exhibition its name.

While the project didn’t begin with the specific goal of recognizing the vulnerability of natural places and wanting to protect them, the act of creating the artwork may have made the embroiderers more receptive to that. “Once you get intimately connected with something, you fall in love with it; or at least you have a bond to it,” Strecker says. “That’s so important to protecting something—you don’t really want to take care of something you don’t know about.”

Strecker also talked about how oddly calming it is to be busy with your hands, which might make it easier to take on stressful issues like mountaintop removal or climate change. “It gives people a way to not only process something that’s difficult and they want to care about, but it gives them a way to act on it in a positive way that feels good to them,” Strecker says. “It feels healing, and beyond that it feels generous.”

The project also is empowered by the fact these stitchers work together as a community, much like the residents of Pine Mountain area bond while their hands are busy making quilts. “It makes them feel like they’re applying their sense of connection and community through this concrete action of making,” Strecker says.

She helps to build community through a shared love of Pine Mountain in ways beyond embroidery. For instance she co-hosts and curates Pine Mountain artist retreats; for the past three years about 150 artists, musicians, writers and naturalists have taken the three-day retreat, which is a collaboration with the Kentucky Natural Lands Trust. Several members of this Pine Mountain Collective—including musicians, a poet and a painter—participated in “Wild Things: Selected Artists from the Pine Mountain Sessions” at Transylvania as part of “Lavish!”

Also this past school year, Strecker enlisted another community—this time her own art students—in a project that blended art with helping make the world a better place. For “A Splash of Generosity” students made ceramic bowls and sold them at an auction to benefit WaterStep, a Louisville nonprofit that sent water filtration devices to Puerto Rico after Hurricane Maria.

This fundraiser, which raised $1,200, was a group effort that had the students form committees for food, finance and marketing. “Everyone contributed in a different way,” Strecker says.

“People need that kind of connection that engages other parts of their minds and their beings.”

In addition to building teamwork skills, the project enlisted the students’ creativity to solve a real-world problem while benefiting them in a way that, say, buying and reselling cookies to raise money or starting a GoFundMe page wouldn’t have.

The craft required their bodies and minds in a focused effort that was thoughtful, intentional and productive. “When you apply that to something specific, it just gets a lot of power and energy and a positive connection that you don’t have when you just write a check for something,” Strecker says. “People need that kind of connection that engages other parts of their minds and their beings.”

Making connections—especially across diverse fields of study—and social engagement are familiar goals of the liberal arts. Strecker, herself a Grinnell College graduate, knows the power this mindset has in effecting positive change. And because these students may have taken an array of subjects—from anthropology to art to chemistry—they’ll have unique ways of doing so.

She sees this in action while team-teaching a May term course on mountaintop removal, biodiversity and human culture in mining areas with philosophy professor Peter Fosl. The course takes students well beyondftextbook learning, offering a variety of activities from simply spending time in the forest to photography to tackling intellectual issues like: What does ownership of land really mean? is way of approaching problems provides unexpected solutions. In this case combining philosophy and art creates a synergy. Art can open up avenues inaccessible to rigorous philosophical arguments on the one hand, and on the other, thoughtfully navigating the intellectual history of an idea can make an artist’s work less naive.

Also important to creative problem solving is creating a space to experiment with ideas—to go outside your skill zone. That can be risky professionally but is encouraged in school. “Art is often talked about as a game space,” Strecker says. “It’s kind of a virtual space to explore in a way you don’t normally explore. You’re playing by the rules but willing to bend them. You’ve got that creative nimbleness that you’ve tried out before in the art space and you can apply it to real-world problems.”