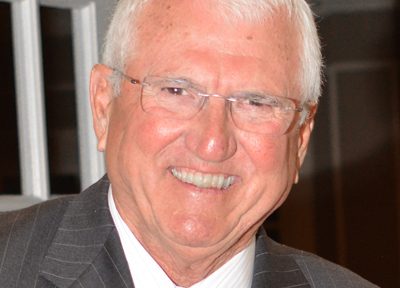 Carpenter is a 1964 Transylvania alumnus and served on the school’s Board of Trustees from 1993-2000. The Kentucky native now lives in Jacksonville, Fla.

Carpenter and his wife, Marilyn, were the lead donors for a major interior upgrade of Transylvania’s Carpenter Academic Center, which wrapped up this spring. He also is a recipient of the university’s Morrison Medallion, which is given to alumni for outstanding service to the school and its programs.

“Our graduating seniors can learn valuable life lessons from Pete Carpenter,” President Seamus Carey said. “Not only has he excelled in the business world, but he has exemplified living generously, which is the theme of this academic year. Mr. Carpenter’s efforts to transform the university’s main academic building into a cutting-edge learning environment will help sustain our liberal arts mission well into the 21st century.”

Transylvania’s commencement will begin at 9 a.m. in front of historic Old Morrison. The rain location will be the Clive M. Beck Center.

Students in this year’s graduating class have distinguished themselves academically, with numerous accolades.

• Forty-six percent of the 218 graduating seniors are receiving Latin honors for a cumulative GPA of at least 3.5, and 45 percent are receiving program honors.

• Thirty-five percent of this year’s graduates studied abroad while at Transylvania—either for a full term, a summer or during the four-week May term.

• Students will pursue advanced degrees at institutions such as Johns Hopkins University School of Advanced International Study, Vanderbilt University Law School and the UK College of Medicine. Other opportunities awaiting students after graduation include the U.S. Air Force, Teach for America corps and a position as an assistant national bank examiner for the Federal Office of the Comptroller of the Currency.

• The first Transylvania student will graduate with the new digital arts and media minor.

• Student achievements include two prestigious Fulbright English Teaching Assistantships, including one of only 10 U.S. ETAs for France this year; a Lexington Rotary Club Ollie and Dick Hurst Award; and a Southeastern Writing Center Undergraduate Tutor Award.

• The student speaker at this year’s commencement will be Riley Bresnahan, who was National Champion Speaker in IPDA at this year’s Pi Kappa Delta (National Forensics Honorary) National Tournament. She also studied at the School for International Training’s Post-Genocide Restoration and Peacebuilding program in Rwanda thanks to a Benjamin A. Gilman International Scholarship sponsored by the U.S. Department of State.