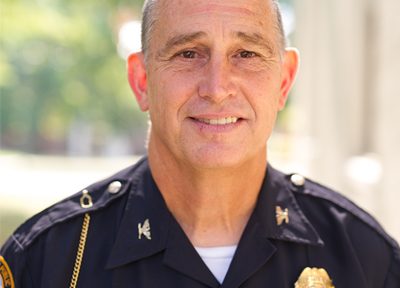 LEXINGTON, Ky.—Gregg Muravchick, director of Transylvania University’s Department of Public Safety, has been selected to receive a TOP COPS Awards honor for his actions during a machete attack last April in a campus coffee shop.

Lexington Police Commander Brian Maynard nominated Chief Muravchick for the prestigious award, presented by the National Association of Police Organizations, which he will receive during a ceremony on May 14 in Washington, D.C.

“Clearly his actions that day stopped the attack,” said Maynard, who praised Muravchick for handling the incident without the use of deadly force when students were nearby. The chief responded quickly to the scene and subdued the attacker, who sent a student to the hospital with non-life-threatening injuries. Transylvania President Seamus Carey and coffee shop employees also helped prevent further injuries by their quick thinking and assistance.

Muravchick has 40 years of experience in law enforcement. He served in a variety of roles with the Kentucky State Police, including Police Academy instructor, narcotics detective, assistant public affairs officer, trooper and as a member of the Special Response Team. Muravchick, who retired as a KSP sergeant, also was executive director of the Office of Investigations for the Justice and Public Safety Cabinet, a Frankfort Police officer and commander of the Franklin County Sheriff’s Office.

Since coming to Transylvania in 2011, Muravchick has implemented an Adopt-a-Dorm program and other initiatives that help campus officers develop relationships with the students they protect. He believes the community becomes stronger through these personal interactions and by establishing roots within the community.

The TOP COPS Awards go to 10 officers across the country, and the top nominations from each state not represented by one of these 10 receive an Honorable Mention. Muravchick is the Honorable Mention winner from Kentucky. TOP COPS Awards “educate the American public about our nation’s heroes and pay tribute to law enforcement officers from federal, state, county and local agencies from across the nation for outstanding service to their communities during the preceding year,” according to NAPO.

“I’m truly honored and humbled to be even mentioned for this award,” Muravchick said. “The true heroes that day were the coffee shop employees who distracted the attacker and our community partners and first responders who assisted in bringing this tragic incident to an end without any life-threatening injuries. I’m truly grateful for their friendship, professionalism and commitment to the people we serve in our community.”

Muravchick’s other honors include two Trooper of the Year awards from the Frankfort State Police post, a recognition from the Optimist Club of Frankfort for Outstanding Contributions and Volunteer Work to the Youth of the City of Frankfort and Franklin County, and several other awards for outstanding law enforcement and coaching youth sports.