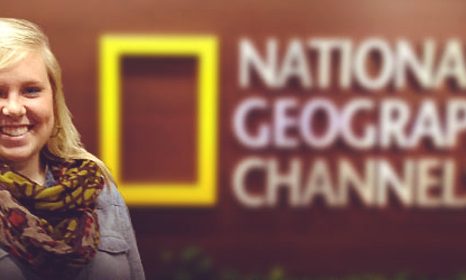 Clarke Waldrop, who graduated with a theater degree from Transylvania University in May, is proving that premise wrong in her career with the National Geographic Channel in Washington D.C. Clarke is associate producer of ad sales creative, creating on-air promos for the channel’s programming and advertisers. And she credits her Transylvania education for helping her land her first job in TV.

“Transylvania opened up doors for me,” she says. “It didn’t matter that I didn’t have these classes that students at other schools may have taken—Transylvania taught me the skills that I could apply to any job. It gave me the writing skills to be able to write these scripts, and I’m learning very quickly, which I think Transylvania taught me, as well.”

Clarke’s position has her integrating promotions for the shows that air on the National Geographic Channel and NatGeo Wild with specific advertisers. So she might create a spot highlighting the latest blockbuster movie and the NatGeo show “Alaska State Troopers” by figuring out how to meld the two into one 10-second piece.

“I like the creativity of that,” she says. “It’s challenging me because I not only have the freedom to write creatively about the shows, but I’m challenged to put the brand in, as well. I love being able to work with editors and designers and production houses.”

Her interest in television production goes back to the beginning of her Transylvania career, and she actively sought out internships that eventually led her to National Geographic. Her first summer she worked with a small production company in western Kentucky; after her sophomore year she interned at Kentucky’s PBS affiliate; and before her senior year she landed an internship at Nickelodeon, working for the on-air promotions department. Another Transylvania graduate, Virginia Hamilton, also worked for Nickelodeon, and she and a few other coworkers kept in touch with Clarke during her job search.

“Because I had built a relationship with them, they were forwarding me other opportunities that they were hearing about,” Clarke says. “The network Transylvania has—that’s how I got these internships that led me to the job here.”

And with her foot firmly in the door, Clarke expects to have a long career in television, whether that’s advertising, promotions, editing, or something else.

“I just knew that I wanted to be in television production,” she says. “I didn’t know whether that was going to be behind the camera or in front of the camera. National Geographic is a very relaxed and open company, and I’m able to work with people from multiple departments, so who knows where I’ll end up next?”

As for someday scratching the acting itch?

“That’s one of those dreams I have in the back of my head, but I’m still really interested in what I’m doing now,” she says. “I don’t know if it will happen in the future. It’d be awesome if it did—whether it’d be Broadway or a television show or a movie—I’d love to do it.”