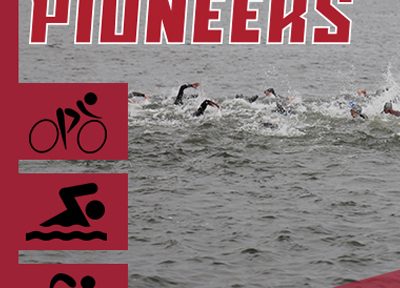 The sport’s competitions include stages of cycling, running and swimming.

“With a multitude of existing events and recruitable athletes in the region, as well as its proximity to other varsity women’s triathlon programs, Transylvania University was a perfect fit to add NCAA women’s triathlon,” said Tim Yount, chief operating officer at USA Triathlon. “More importantly, the Transylvania Women’s Triathlon program was made possible by leaders within the athletic department and the school as a whole who believe in the future of this sport at the collegiate level.”

“We are so excited to have the opportunity to start a women’s triathlon team at Transylvania,” said Holly Sheilley, Transylvania vice president for enrollment and student life and director of athletics. “As we were exploring the possibilities, the support received from local triathletes and USA Triathlon made this an easy decision in the end. Dedication, passion, hard work and the will to win not only describes triathletes, but what we aspire for our students at Transylvania in all their endeavors. We feel this is a perfect fit for our institution and are very thankful to have received the USA Triathlon grant.”

Transylvania expects to field an initial roster in 2018-19, with an eventual goal of growing to an approximate team size of 16. With the announcement of the university adding its 27th sponsored varsity sport, Transylvania will begin conducting a search for a women’s triathlon head coach this summer.

Triathlon received overwhelming approval through a voting process in 2014 at the NCAA Convention in San Diego by Division I, II and III colleges and universities to be included as an NCAA Emerging Sport for Women, and has a 10-year window to demonstrate sustainability as an NCAA sport option. Triathlon is a fall sport in the NCAA schedule, with the 2017 Women’s Collegiate Triathlon National Championship set for Nov. 5 in Tempe, Ariz.