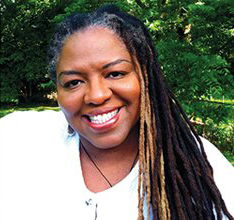 Wilkinson is a founding member of the Affrilachian Poets collective, the Appalachian Writer in Residence at Berea College and co-owner of Wild Fig Books & Coffee in Lexington.

Wilkinson will receive the award on Tuesday, March 21, at 5 p.m. in Transylvania’s Carrick Theater. The event, which will be free and open to the public, will include a reading and book signing.

This is the third year for the Judy Gaines Young Book Award, which honors recent works by writers in the Appalachian region.

The University of Kentucky Press—the publisher of this year’s winner—describes the novel as “a lyrical exploration of love and loss that centers on several generations of women in a bucolic southern black township as they live with and sometimes surrender to madness.”

Wilkinson is an “extraordinary storyteller,” said Transylvania English professor Kremena Todorova. “Her characters in ‘The Birds of Opulence’ are ordinary people dealing with everyday events like birth, postpartum depression, illness and the fast-spreading gossip of small-town folks. Yet, Wilkinson asks us to care about her people. Using language that is irresistibly beautiful, Wilkinson beckons us to enter her characters’ lives, to begin to do what the novel’s opening word asks us to do: ‘Imagine.’”

“The Birds of Opulence” has won several other honors, including the Ernest J. Gaines Award for Literary Excellence.

Transylvania’s award is funded by Byron Young, who graduated in 1961, in honor if his late wife Judy Gaines Young, a ’62 graduate.

The award comes with a $2,500 cash prize, and a signed copy of the novel will be preserved in the Transylvania Special Collections.

Along with this honor, the university each year presents the Judy Gaines Young Student Writing Award. The 2017 winner is Justin Wright, who is an anthropology and theater major— and a newly inducted member of the Affrilachian Poets. Wright also will read from his work at the March 21 event.

Carrick Theater is in the Mitchell Fine Arts Center off South Fourth Street. Plenty of free, nearby parking is available.