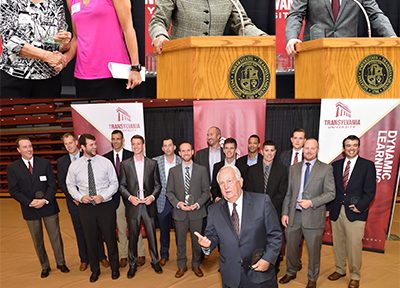 LEXINGTON, Ky.—Transylvania University inducted three alumni and the 2000-01 men’s basketball team into the Pioneer Hall of Fame on Saturday during an evening ceremony in the Beck Center.

The individual inductees and years they graduated are Heather Adams-Blair ’95, Judy Henry ’82 and Michael Ray ’03.

“Each year our Hall of Fame ceremonies present us a list of exceptional individuals with remarkable achievements, both during their careers at Transylvania and after, but this year’s group is in a class unparalleled,” said Holly Sheilley, vice president for enrollment and student life. “Heather, Judy, Michael and the members of the indelible 2000-01 men’s basketball team have forged legacies that speak to the types of students that we are fortunate to have in our community and as our alumni.”

Go here for more information on the Pioneer Hall of Fame.